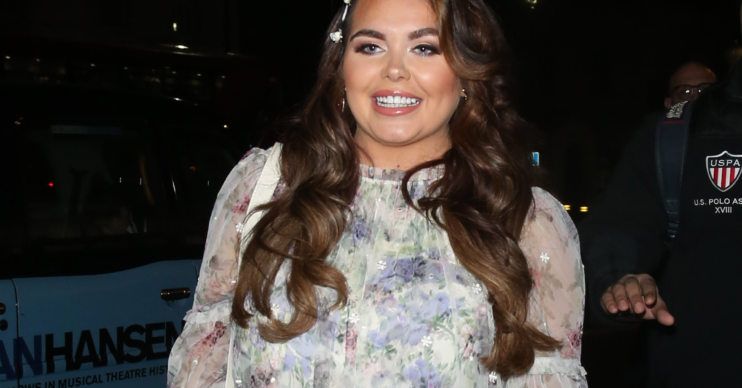 TV star Scarlett Moffatt has impressed her social media followers by chopping her own hair during lockdown.

The former Gogglebox and I’m A Celebrity favourite, 29, suffers suffers abuse from trolls on a regular basis.

Thankfully, however, and following a plea, her legions of Instagram fans deluged her with support on the pic-sharing platform.

“So today I have trimmed my hair myself with kitchen scissors so please be kind in the comments,” she captioned the shot.

Scarlett went on to wish her fans: “Hope your weekend is full of fun zoom calls with your loved ones, dog walks, BBQs in the garden or binge-watching a box set and eating carbs on the couch.”

The image quickly accrued over 15,000 Likes – and waves of positive comments.

Please be kind in the comments.

And many were impressed with her cutting skills – but not everyone was as confident about doing it themselves.

“I did mine yesterday with the kitchen scissors. Good job,” another agreed.

But someone else chuckled: “You look fab… new career in hairdressing as it looks great… I won’t try it myself though.”

One other person did wonder whether Scarlett should have picked some more appropriate equipment for the job.

Scarlett’s efforts also seemed to inspire those taking in her new ‘do.

“I’m gonna attempt to cut my own hair too, it’s way past my shoulders now,” insisted one person.

Another person echoed them: “I gonna attempt to collar my hair, it’s so dark and horrendous.”

However, another person who admired Scarlett’s handiwork admitted: “Mine needs a trim but I wouldn’t know where to start.”

Despite being pleased with her lockdown haircut, Scarlett was unimpressed earlier this week when she hit out at Gogglebox.

She claimed she had been made to ‘look thick’ in clips.

Recalling her past role on her new podcast, Scarlett complained: “I was a professional couch potato, you’re making it sound easy.

“It was actually very difficult. Don’t take the mick. Do you know what was difficult?

“I’d never watched Downton Abbey, like a full episode, and they show us ten minutes of like a man bleeding from the mouth and then I’m like, what’s going on? What’s happening? Who’s this?

She continued: “And they only show that and it looks like I’m thick as [bleep], but really it’s because I genuinely don’t have a clue what’s going on.

“I’m like, seriously who is this because I’ve never watched it before so actually it was very difficult.”