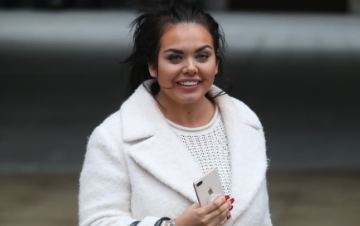 Is she preparing to take to the dance floor?

Could Scarlett Moffatt be preparing to star in this year’s Strictly Come Dancing?

That’s what some of her fans think after she tweeted this week that she’s been spending hours watching old clips from the show.

The tweet was liked by 1.4k of her fans and dozens commented to ask if she was watching the routines to prepare herself for a future appearance.

“I think it might be worth a small bet that you are in this years line up,” one wrote.

“Was thinking the same thing is this her hinting to being put on there,” another replied.

“Is it research for this year’s show?!” a third asked, while a fourth also wondered: “Are we going to see you on strictly come dancing next?”

Others said they thought it would be wonderful to see the 28-year-old strut her stuff on the Strictly dance floor. 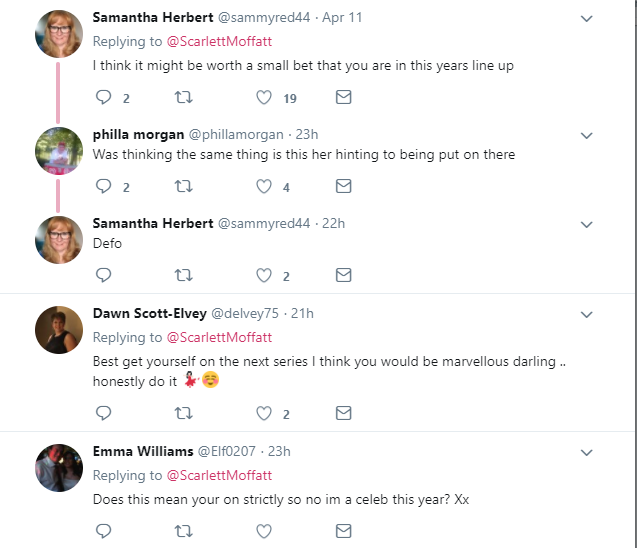 She’s showed off some her moves already on Ant and Dec’s Saturday Night Takeaway where she has often appeared in the End Of The Show Show.

“You should really do @bbcstrictly, both my girls said you should do it after they saw you dancing on @itvtakeaway,” one of her followers told her.

Another said: “Scarlett you would be a fabulous contender, hope you get the chance to do the show.”

Read more: Ant and Dec back together in Saturday night’s BGT – and things get emotional

If she did appear on the show, Scarlett would have a distinct advantage as she did ballroom dancing when she was a child.

She’s said in the past that she’s not sure it would be “fair” for her to take part given her history.

The former Gogglebox star did not reply to the recent speculation and it will be months before the BBC confirm the celebrity line-up for this year’s show.

The professional dancers taking part have also yet to be confirmed. The only exception is Brendan Cole, after the BBC confirmed earlier this year that they would not be renewing his contract.

A spokesman for the BBC said at the time: “We’d like to thank Brendan for being part of the show since the beginning – winner of the first series – and for the contribution he has made to its success.

Scarlett has previously appeared on I’m A Celebrity where her bubbly personality won her numerous fans and led to her being crowned Queen Of The Jungle.

Since then, she’s become the host of the revived Street Mate, taken a starring role in Saturday Night Takeaway and released her own fitness DVD.

So could Strictly be next? We’ll have to wait and see!