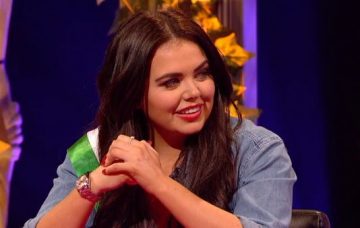 Scarlett Moffatt fails to recognise her OWN boyfriend

She accidentally mixed up Lee Wilkinson and his twin brother Ryan!

Poor Scarlett Moffatt was left in fits of laughter after completely failing to identify her OWN boyfriend on Celebrity Juice.

Keith told Scarlett: “A little bird tells me you’re in sweet, sweet love. You won’t believe this, I think he’s the first person who has been legally, successfully cloned.”

A photo flashed up of Lee with his twin Ryan, with Keith pointing out the only difference between the two men was Lee’s tattoos.

Scarlett replied: “He’s an identical twin! You can tell the difference because of the tattoos.”

Keith questioned if Scarlett had ever got drunk and mixed the twins up, to which she said: “No! I have never made that mistake!”

And how right he was, as Scarlett was then challenged to pick boyfriend Lee out of a collage of photos which could be him or his twin – and got it wrong!

A laughing Keith said Scarlett had just proved his theory, especially when she took a stab at picture A and it turned out all four collage photos were Ryan!

“The answer is none of them!” shouted a gleeful Keith. “They’re all his identical twin!”

No word yet on how Lee feels about Scarlett’s mix up!

Scarlett and Lee have been dating since the end of last year; it’s thought the Newcastle-based pair were childhood friends who reconnected over Christmas.

Lee is a fitness model who has also worked with Dreamboys.

Proving things are serious, he recently accompanied Scarlett to Florida, where she helped present the series finale of Saturday Night Takeaway live from Universal Orlando Resort.

Have you ever dated a twin? Do you ever get twins mixed up? Leave us a comment on our Facebook page @EntertainmentDailyFix and let us know!