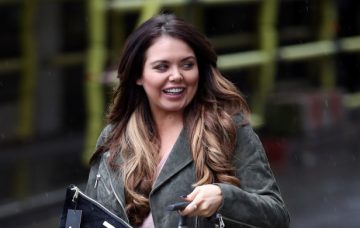 Gogglebox favourite pulls out of race with only minutes to go

Scarlett Moffatt pulled out of Sunday’s Great North Run and will instead take on the challenge next year.

The former Gogglebox star was set to run the 13 miles of the Newcastle-based half-marathon on Sunday morning. Other famous names running this year included Paula Radcliffe, Vicky Pattison and Olly Murs.

The race was eventually won by Sir Mo Farah, in a course record of 59 minutes and 26 seconds.

Scarlett, 28, told fans on her official fundraising page that she wouldn’t be taking part in the race but didn’t give a reason, promising she’d do it next year instead.

A look at her GoFundMe page shows that she’d raised £150 of her £5,000 goal for the Angel Trust. The Durham-based charity aims to provide community services in her native north east.

“Thank you all so much for your donations,” she wrote. “I have matched donations to date and have closed the donations on this page.

“I completely understand if you want your sponsorship back, which you can do by contacting the charity directly.”

The news will come as a surprise to her fans as she has been posting regular social media updates about her training and appeared to be looking forward to running the race in her home city.

When she first announced her plans to run, she wrote on her fundraising page: “If you said to me ‘Scarlett you’re going to run a half marathon 13.2 miles’ I’d have laughed and said I can’t even run a bath! I’m the kind of person who doesn’t even go on long walks let alone run.”

Back in July, she suggest she was in need of some motivation.

She shared a throwback picture of herself looking fit, quipping: “Motivation where are you. I need you back for the Great North Run.”

Scarlett announced her plans to take on the Great North Run in April, telling fans: “Excited to announce I’m the ambassador for a local northern charity the Angel Trust, on thinking of ways I could raise money, I’m pushing myself to the extreme & doing something I’ve actually never done before (running) & not just a little run, the half marathon.”

Entertainment Daily has reached out to Scarlett’s representatives.

Have you ever run a marathon or half-marathon? Leave us a comment on our Facebook page @EntertainmentDailyFix and let us know!