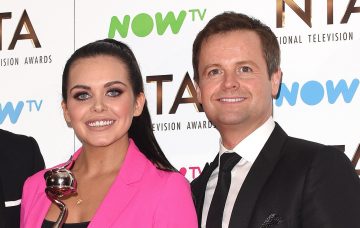 She's over the moon for her good friend and TV co-star!

Scarlett Moffatt has shared her excitement that good friend Declan Donnelly is to become a dad.

Dec – one half of Ant & Dec – announced in March that he and wife Ali Astall are expecting their first child together.

Scarlett has become friends with Dec thanks to I’m A Celebrity… Get Me Out Of Here! and Saturday Night Takeaway, and told Daily Mail’s You magazine she’s thrilled for the couple.

The former Queen of the Jungle said: “Oh, it’s lovely. I’m so happy for him and [his wife] Ali.

“She’s an amazing woman and they treat their little dachshund Rocky like a prince so I know they’re going to make good parents.”

Dec, 42, announced the happy news via Twitter last month, after a newspaper ran the story of his wife’s pregnancy.

Just wanted to say thank you for all the lovely messages. The news has sneaked out a little earlier than we had hoped but Ali and I are delighted to be expecting our first child. Thanks for all the love, we really appreciate it ❤️ D x pic.twitter.com/g7mZrWLYs4

He told fans: “Just wanted to say thank you for all the lovely messages. The news has sneaked out a little earlier than we had hoped but Ali and I are delighted to be expecting our first child. Thanks for all the love. We really appreciate it.”

Scarlett, meanwhile, told You mag that she’s keen to have children of her own one day, but is in no rush to start a family now.

She admitted one of the first things she will ask a potential date is whether he wants children, so she knows early on if they’re on the same page.

“It doesn’t mean I want them right there and then,” she clarified. “I’d like to get married and have babies one day.”

Scarlett, 27, recently split from her fitness model and trainer boyfriend Lee Wilkinson, although she’s yet to speak in detail about the break-up.

She alluded to romance woes with several Facebook posts earlier this month, including one which said: “It scares me how much you think you can know someone.

“Trust is everything, if someone doesn’t think you’re enough for them that’s a reflection on them not you.”

Scarlett jetted off to Orlando, Florida with a close friend following the split, and is now off to Vietnam on yet another adventure.

Lee, meanwhile, has spoken to The Sunday Mirror, saying he did nothing wrong.

“All I did was message my ex. When I finished with my ex, she sent me loads of messages and I didn’t reply to them,” he said.