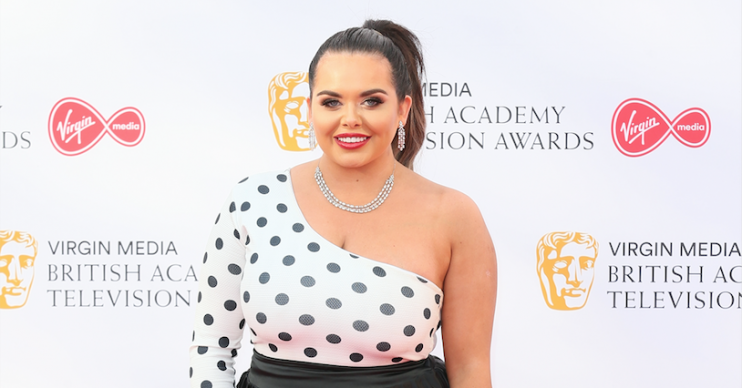 Stepping out at last night’s TV BAFTAs, telly favourite Scarlett Moffatt opened up about her ex-boyfriend, branding him a “sociopath”.

Speaking to The Sun on the red carpet, Scarlett revealed: “My family like him which is a first and it’s nice not to be with someone who is a sociopath.” She added: “I’m loving life.”

Scarlett split from ex Lee Wilkinson in 2017 after discovering that he had been texting his ex behind her back.

Speaking at the BAFTAs, Scarlett also revealed that she has an exciting new TV show with her family in the pipeline.

She teased: “It’s something different. I can’t wait to tell everyone as I am so excited. Maybe it involves foreign travel.”

The star – who wore a black and white polka dot dress by Renek Couture – also took the opportunity to catch up with her Saturday Night Takeaway pals Ant and Dec.

“I love them both. I am super excited to see them,” she revealed, adding that she had texted Dec ahead of her arrival.

Loved up and looking better than ever, 2019 has been a great year for Scarlett so far.

As well as new work on the horizon, she has just returned from a romantic trip to Paris, where she posted a gushing tribute to her new man.

Scarlett said: “After being broken a couple of times I decided I owed it to myself to give me as much love as I had given others, I put my efforts into self love and for once I felt truly happy.”

She added: “Then all of a sudden this man came into my life and now my heart is even fuller. No one has ever made me feel this way.”

Let us know what you think about our story over on our Facebook page @EntertainmentDailyFix.