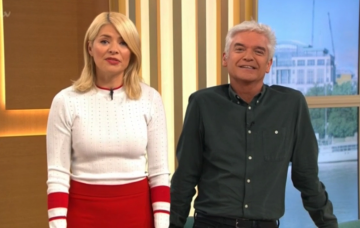 She's discovered the "best job in the world"

Holly Willoughby has joked that she’s in the “wrong job” after realising she could be a maypole dancer instead!

To celebrate the first day of May, Holly and Phillip Schofield opened Tuesday’s This Morning with a segment about the maypole dance, a traditional dance that is associated with May Day celebrations.

Alison Hammond hosted the segment from outside the studio and met “Queen of the Maypole” Donna Maria and her dog, Snowflake.

“How did this all come about, maypoling?” Alison asked Donna Maria.

“It’s the celebration of the coming of spring,” Donna Maria replied. “May time! Look at the sun and the blue skies, it must work.”

Donna Maria revealed she is known as the “Queen of the Maypole” because she “dances the maypole at events.”

She then showed Alison how to do the maypole dance, leaving Phil and Holly in hysterics.

“I’m going to be doing this a bit later,” Alison said. “We need a few more people, though!”

As the show returned to the studio, Holly admitted she would love to be a maypole dancer.

“You reckon that’s the best job in the world?” Phil asked his co-presenter.

Holly replied: “I think I am definitely in the wrong job. I mean [Donna Maria] is having such a good time.”

But Phil didn’t seem so convinced and asked: “But what does she do for the rest of the year?”

“I don’t know,” Holly replied. “But she gets to wear a rainbow dress!”

How amazing would it be to see Holly become a maypole dancer?!

But it seems she just won’t be able to find the time.

Alongside a black and white snap of her in a roll neck jumper on Instagram looking at the words, “Let me tell you about TRULY,” she wrote: “So… finally I get to tell you about something I’ve been working on passionately and secretly for a long time..”

“This is TRULY my new lifestyle brand that launches in the Autumn.”

“Let the adventure begin!” she added.

What would be your dream job?  Leave us a comment on our Facebook page @EntertainmentDailyFix and let us know!