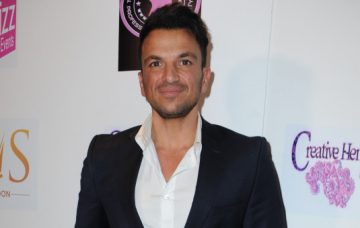 He has four children aged between one and 13

Peter Andre has claimed “kids need boundaries” as he discusses life as a father of four.

The Mysterious Girl singer has son Junior, 13, and daughter Princess, 11, from his marriage to first wife Katie Price and daughter Amelia, four, and son Theo, one, from his union with second wife Emily.

In two new interviews, the popstar spoke about his parenting style.

Peter told OK! magazine: “I’m strict in some ways. On school nights they go to bed at a certain time, but at weekends I give them freedom. I think kids need boundaries.”

In a separate chat with Reveal magazine, Peter admitted being stricter with Junior and Princess than Emily is, but said they balanced each other out as she’s stricter with Amelia and Theo than he is.

Peter, 45, added: “It’s the balance of trying to give them a little bit of freedom, but not too much.

He gave the example of son Junior wanting a phone when he was 12; Peter agreed but would not let him have social media until he was 13.

Emily, meanwhile, has spoken out about her own parenting style, writing in a previous OK! Magazine column: “I think getting the balance right as a step-parent is crucial.

Peter recently shared spent an idyllic weekend with Emily and the kids on the beach.

And I took this one of Emily, Theo and Amelia #beachvibes #familytime

He shared the two images to his Instagram account on Saturday evening, after he and Emily treated the kids to a fun afternoon.

In one picture taken by Peter, doctor Emily can be seen watching carefully as their son Theo crouches down on the beach to pick something up.

Their daughter Amelia can be seen by the edge of the waves in the background. Peter captioned the perfect snap: “I took this one of Emily, Theo and Amelia #beachvibes.”

Emily took this of us today 🙂 #beachvibes #familytime Can you spot J?

The other photo, taken by Emily, shows Peter holding hands with Theo and his eldest daughter Princess as they gaze out at the water.

His eldest son Junior can be seen (just about!) in the distance, enjoying a swim.

Do you agree with Peter’s comments? Leave us a comment on our Facebook page @EntertainmentDailyFix and let us know!