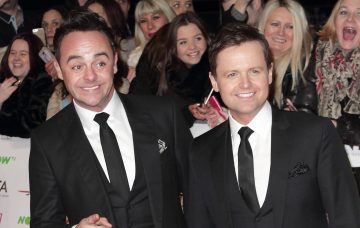 TV presenter Ant McPartlin has joked he loves the idea of “danger and potential death” when it comes to Saturday Night Takeaway stunts and skits.

To celebrate 100 episodes of their ITV show, the Geordie presenter and his best friend Dec Donnelly spoke about the past 15 series in a new interview.

Discussing their favourite moments as hosts of the show, Ant, 42, said: “Probably abseiling down the building for Ant Versus Dec. I love anything that involves heights and danger and potential death!”

Dec, 42, added: “I remember when we first abseiled down the building and as you went down you got to peer into all the windows and it was really interesting. I just remember thinking how messy some people’s desks were!”

Unlike Ant, Dec says he is not a fan of the big stunts, saying: “We’ve done some scary stuff: abseiling down the building, collecting flags from the outside of the building, zipwiring. Climbing up buildings, climbing down buildings. I broke my arm on a motorbike stunt one year.

“I don’t really like the scary stuff but they always manage to persuade me to give in and do it. Ant’s much better at those ones than me.”

His I’m A Celebrity… Get Me Out of Here and Britain’s Got Talent co-presenter confirmed: “I’m not bothered, so every time they give us a heights one I’m like, ‘Yes!’

“You’d think that would put me at an advantage but it never works out that way. He always claws it back at the last minute or wins it back the following week.

“But yeah, we’ve done some pretty scary stuff over the years and some fun stuff as well that you’d never get to do if you weren’t on a telly show.”

It comes after a difficult past year for the ITV star. Ant spent time in rehab, struggling with an addiction to prescription painkillers, sustained after knee surgery.

After getting out of rehab, he was faced with further trouble at home, as his marriage to make-up artist Lisa Armstrong fell apart.

And as Saturday Night Takeaway returned to screens on Saturday, fans worried it was too soon for Ant to be back at work.

The presenter appeared flushed and seemed to stumble over some of his words, some fans on Twitter claimed.

However, many more rushed to defend Ant, saying he looked absolutely fine and they were thrilled to have him back on TV.

“Is it me or is Ant looking pretty hot tonight!! @antanddec #SaturdayNightTakeaway #sexonlegs 😂😍,” said one fan.

“I’m crushing on Ant I think he looks amazing 😍 #SaturdayNightTakeaway,” said another.

Are you enjoying the new series of Saturday Night Takeaway? Leave us a comment on our Facebook page @EntertainmentDailyFix and let us know what you think!