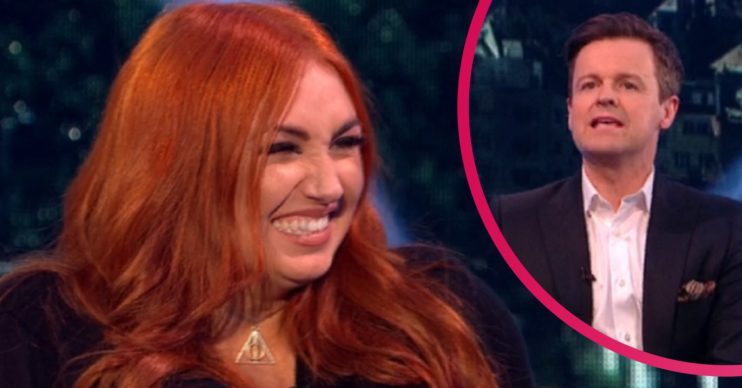 ITV viewers watching Saturday Night Takeaway complained to Ofcom after a woman who served her pals cat-poo pizza was awarded a free holiday.

The deeds included intentionally shrinking her husband’s football shirt ahead of a stag weekend, but it was one involving a pizza oven that left viewers revolted.

On the programme, Maddie admitted serving her friends pizza that she cooked in an outdoor oven her cat had been using as a litter tray.

A picture of the oven’s filthy interior flashed up on screen.

Later, Ant and Dec told Maddie and her family they had won a trip to Italy.

Ant said: “We’re sending you on a seven-night holiday to the home of pizza, Italy. Enjoy guys, eat some proper pizza.”

Maddie joked: “Am I allowed to go?”

Ant told her she was going, saying it would allow her to think about her “dreadful behaviour”.

The Maddie segment was awful. ITV, why are we rewarding this behaviour?

Another said: “Cat faeces can be toxic, so dangerous. Shouldn’t be rewarding this behaviour.”

A third wrote about the segment: “Why is this okay? The Maddie segment was awful. ITV @itvtakeaway why are we rewarding this behaviour?”

If a man destroyed his wife’s dress because she lied about going to a hen do, then that is coercive control. So just because the genders are switched why is this okay? The Maddie segment was awful

ITV @itvtakeaway why are we rewarding this behaviour?

You can get toxoplasmosis from cat poop. Bet Maddie didn't think of that when she was cooking her cousin pizza in her poo infested oven. Not funny and definitely shouldn't be rewarded @itvtakeaway#antanddec #saturdaynighttakeaway

Now, Ofcom has revealed that it received dozens of complaints from viewers.

Read more: Saturday Night Takeaway fans in hysterics as Ant and Dec warn guest not to flash her boobs

According to The Sun, a spokesperson for the regulator said it had received 146 complaints.

What did you think of the Saturday Night Takeaway segment with Maddie? Leave us a comment on our Facebook page @EntertainmentDailyFix and let us know.