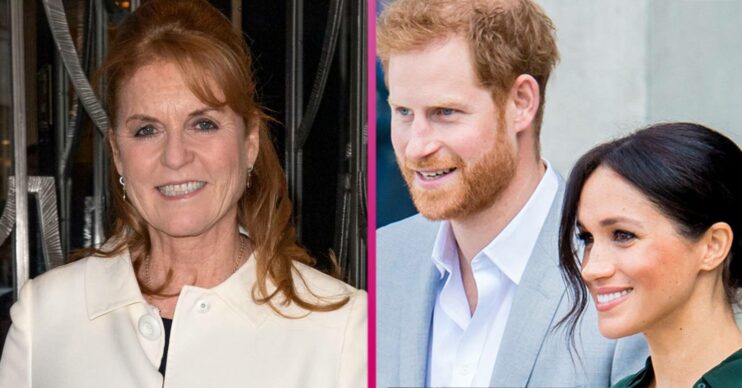 Sarah, Duchess of York reveals what Princess Diana would have thought of ‘Megxit’

Harry and Meghan stepped back from royal life last year

Sarah Ferguson, Duchess of York, has revealed what she thinks Princess Diana would have thought of ‘Megxit’.

Speaking about Prince Harry and Meghan Markle’s decision to step back from the royal family last year, she says we shouldn’t be “judging” their decision.

In addition, both Prince William and Harry have “excellent” wives, suggested the Duchess of York, something Diana would have been very “proud” of.

What did Sarah, Duchess of York say about ‘Megxit’?

Sarah Ferguson shared how we shouldn’t judge Harry and Meghan for their decision to step back as working royals.

Explaining how “life is tough enough”, Sarah said: “We don’t need to be judging others. We need to be open to seeing life in another way.”

She added that Diana would be “very proud” of her sons and would have liked their wives and “fabulous” children.

“I think they’re exceptional, exceptional boys with exceptional wives and fabulous children. I think she would be going, ‘Yes!'” she continued.

Meghan recently celebrated her 40th birthday by releasing a hilarious video from her home in California featuring actress Melissa McCarthy.

Sarah Ferguson on Diana as a grandmother

Fergie also spoke about her close friendship with Diana and the kind of grandma she thinks she would have been.

Read more: Sarah Ferguson says Princess Diana would be ‘so proud’ of Harry and Meghan

“Oh my goodness, can you imagine the grandmother races that we would have together? The parties!

“I would bounce her off the bouncey castle, that’s for sure,” she joked.