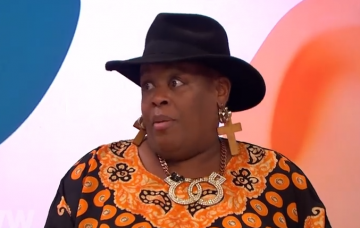 She came from nothing and left, quite literally, with nothing

Former Gogglebox star, Sandra Martin, has revealed just a year after leaving the hit Channel 4 TV show, that she is “back on benefits.”

The 56-year-old was talking on Loose Women, when she revealed that although she splurged her money, she wanted to share her good fortune with her friends.

Sandra said she had a “big” bank account after finding fame, but added: “I didn’t get help or advice. The money was squandered… My friends in the community, they needed food for their children. I have four kids, of course I am going to give them a grand. The money just went. ”

The kind-hearted star said she didn’t regret sharing her money one bit.

She also admitted that she enjoyed spending it on “taxis, hair, partying, drinks on me [and] takeaways” and got “addicted” to hotels, but that when she gave up her starring role on the show, she didn’t think through what would happen next.

Sandra had been on Gogglebox since the first series, and was found when she was spotted in a local pub.

But living life as a TV celebrity with no money coming in, soon came to an end when she needed somewhere to live.

“For eight months, I didn’t live nowhere. I could have stayed with my children but I’m 56, I stayed in hotels.”

But she missed her friends in the community where she previously lived and, now broke, decided to go back and ask for help.

“I went down to the job centre. Went to the homeless – they put me up in temporary accommodation. It’s only a bedsit but I’m back there.”

The former TV star also admitted that she hoped appearing on Loose Women could also open up some doors for her, but she’d happily work in a fast food restaurant if the job came up.

She said: “Being on [the show], I hope some doors open for me.

“If the TV world come in and offered me something like Gogglebox…. I’m waiting for a door to open.”

She also revealed that she would love to go into the Big Brother house as well.

“I would definitely like to go in the Big Brother house but I don’t think they’re going to want me because I talk too much. You’re supposed to keep it a secret. I can’t keep secrets, I love scandal.”

Something, we suspect Big Brother bosses would love!

Would you like to see Sandra in the Big Brother house? Leave us a comment on our Facebook page @EntertainmentDailyFix and let us know what you think!