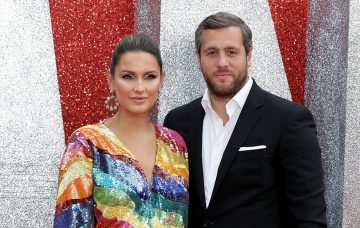 She said it works for them

Sam Faiers has opened up about why she and partner Paul Knightley sleep in separate bedrooms.

The former TOWIE star previously revealed that she shares a bed with their youngest child, eight-month-old daughter Rosie, while Paul shares a room with their son Paul Jr, two.

During an appearance on Lorraine on Monday alongside her sister Billie, Sam said the sleeping arrangements mean the whole family can get better sleep.

Read more: Billie Faiers joined by sister Sam and Ferne McCann for hen do in Ibiza

When asked whether she and Paul still sleep separately, Sam said: “Yeah we’re still in the same situation.

“Even my friends are like, ‘When are you going to get Rosie in her own cot?’ But for me, our whole household get sleep and it’s absolutely fine.”

She added: “Although I will say, this week, I’m decorating for little Paul, his own room. The plan is to get little Paul in his own bedroom, so I’ve made it all nice for him, with animal theme.

“With Rosie, no rush to get her in her own bed but maybe after Christmas Paul and I will be back together in our own bed.”

During the chat, Sam also opened up about receiving criticism for sharing photos to social media of herself breastfeeding her daughter Rosie.

Speaking about the negative backlash, Sam said: “I don’t really understand it.

“I don’t post that I breastfeed all the time. Where I have got a platform, I am a young mum, I feel like there’s not enough of it in the public eye.

“So many young mums have said, ‘I would never have imagined that I breastfeed, but because of how open you are and watching the show, I am.'”

The sisters also opened up about their family show The Mummy Diaries, which will air its fourth series this week.

Although they love doing the show, Sam admitted she would stop filming if her kids ever decided they didn’t want to be on it anymore.

She explained: “I have thought about it and, like you say, they are babies and they can’t really say if they want to be on it but I feel like we’re just taking each series as it comes.

“Right now, everything is working fine and the kids are happy, but if there was ever a point where baby Paul or Rosie said, ‘I don’t want to do this,’ I would not make them do anything they don’t want to do.

“I think I speak for both us when I say that, if they said, ‘I don’t want cameras anymore,’ I would completely understand that.”

Meanwhile, host Lorraine Kelly quizzed Sam on whether she and partner Paul will be tying the knot anytime soon.

Sam said: “I knew you were going to ask me that! We can’t wait to get married, it’s not right now for us. We’re busy with the kids, but we 100 per cent want to!”

Can you relate to any of Sam’s comments? Leave us a comment on our Facebook page @EntertainmentDailyFix and let us know what you think!