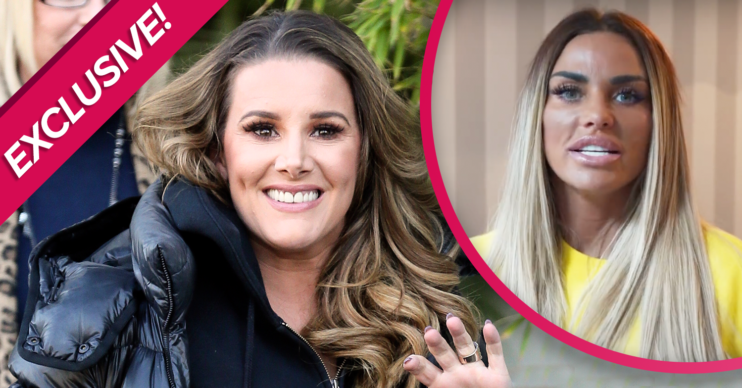 Katie broke both her feet on holiday

Katie was on holiday in Turkey when she tripped and fell, breaking both feet.

Reports have suggested it could be months before the former glamour model is able to walk.

And get well wishes have flooded in from both fans and famous friends.

One such friend is singer Sam Bailey, who was spotted in the recording studio with Katie last September.

Staying out of the “firing line”

“She changes her number like the weather, so I don’t actually have her new number,” Sam revealed.

However, Sam says she’s okay with that because she doesn’t want to be in the “firing line” if something got out that was meant to stay secret.

I tend to not get involved in anything that she does. I don’t want to be in the firing line if something’s got out.

“I’ll just send her messages and she knows I’m here if she needs help, but I tend to not get involved in anything that she does because as soon as you know something and it comes out, you’re in that circle.

“I don’t want to be in the firing line if something’s got out,” Sam added.

Will Katie Price’s song with Sam Bailey be released?

Eyebrows were raised when the X Factor winner was pictured in the recording studio with Katie last year.

So will the track they laid down ever see the light of day?

When ED! spoke to Sam about the duet, she teased: “We’ll just have to wait and see.”

Last autumn, Katie posted pictures of herself and Sam in the studio with producer Rick Live.

She said she was “so excited” and teased that a song was “coming soon”.

However, almost a year on and two broken feet later, we still haven’t heard the ladies’ track.

Sam told us: “Katie’s the sort of girl who has ideas and then it goes out the window.

“I’ve recorded what I needed to record and if it happens, it happens. It’s all a bit of fun,” she added.

Sam revealed Katie is “a big fan” of hers and said: “She loves my voice, so when she said about recording a song together I was like: ‘Oh this will be such a giggle.’ I’m up for a laugh with anything.”

However, while Sam revealed that it was “good fun” being in the studio together, Katie is still to record “certain parts”.

“Obviously because of her situation at the moment, she probably can’t get into a studio,” Sam said.

“So I don’t know if it’ll ever come about, who knows, we’ll just have to wait and see.”