A pic uploaded to Instagram showed the mum-to-be cradling her stomach with her blonde hair swept away from her face.

And she got dolled up for the occasion - wearing her wedding dress, joking she was 'getting her money’s worth'.

"Throwback to getting my money’s-worth on our 1 year wedding anniversary," Briony joked in the caption.

She went on to give her Chesney Brown star hubby that dressing up in her wedding gown could become a regular thing.

Briony added: "@samaston93 be prepared for the annual dress up."

You're the only one in the world who knows what my heart sounds like from the inside.

The 25-year-old yoga instructor came in for enthusiastic praise from followers, with one noting she was 'glowing'.

"Omg you glow!" they wrote in the comments section.

You’re the only one in the world who knows what my heart sounds like from the inside, and I can’t quite put into words how beautiful that feels✨

"This is lovely!” agreed another social media user.

And a third chipped in: "You look stunning.”

Briony went on to share another update about her pregnancy with a close up of her bump.

The pic also gave fans a glimpse of a sleeping basket with an infant’s sleeping outfit with 'Baby Aston' on the front.

Making a sweet tribute to her unborn son, she wrote in the caption: "You’re the only one in the world who knows what my heart sounds like from the inside.

"And I can’t quite put into words how beautiful that feels."

Earlier this month it was revealed the unusual way in which Sam discovered he is going to be a dad.

Briony told OK! magazine: "We found out the day before lockdown.

"Sam couldn't come with me because of the current rules, so I got the consultant to write down the sex on a piece of paper and put it in an envelope and we both then sat in the car and opened it together.

"We were over the moon." 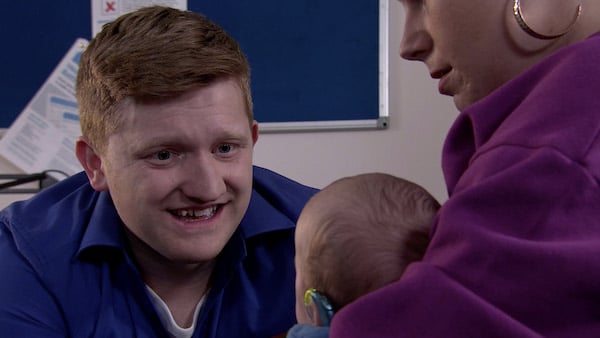 Sam and Briony also admitted they are keen to 'fill their house' with children.

However, Sam - one of nine children himself - noted he's not sure they willl have as many children as his parents.

The couple, who have been together since they were teenagers, got married in May 2019.