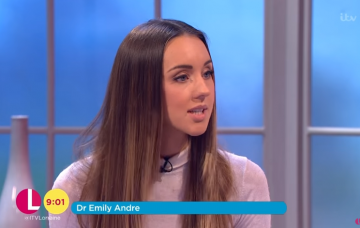 Opening up about her own experience to encourage others

Following a new report that more women than ever are not going for potential life saving breast scans, Lorraine Kelly was on her show this morning discussing it with Peter Andre’s wife Emily.

Emily, a qualified doctor, was standing in for the show’s usual medical specialist, Dr Hilary Jones.

The 28-year-old led a discussion on the day’s biggest health headlines, and spoke about her experience of finding a lump on her own breast.

She said: “It seems that a lot of women are fearful of what they might find, which is really interesting that would make them delay going in for their screening.”

Read more: Cheryl’s music comeback could be sooner than you think

The pair discussed the importance of awareness, and the Coppafeel! Breast Cancer charity, that campaigns and encourage women to regularly check their breasts.

She continued: “I do check, even though I’m a doctor, I found a lump in my breast about a year ago, and I did ring the GP and kind of considered if it was the right thing to do.

“I did go, and actually was surprised that they referred me very quickly to the Royal Marsden [a specialist cancer treatment hospital in London].

“It was interesting that I didn’t need to feel silly about going in because I’m a young woman.”

Read more: Where has the I’m A Celebrity National Television Award disappeared to?

She also reassured younger women watching, that they shouldn’t be scared to go to the doctors if they’re worried.

She said: “They dealt with it so sensitively and quickly and it was fine. Just to let young women know that whilst it’s unlikely to be anything serious it is really important that you check yourself, know what’s normal for you.”

Today was Emily’s first segment on the TV show, and praised her:

The mum of two returned to work in December following her maternity leave, after having her second child with Peter.