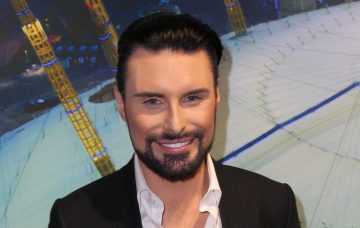 Rylan had been in Lisbon to commentate on the semi-finals

Rylan Clark-Neal has spoken out about the Eurovision 2018 security team after a stage invader crashed UK entry SuRie’s performance.

A man rushed onto the stage while SuRie was performing her track Storm in Lisbon on Saturday night, snatched her microphone and shouted into it, before being tackled away.

He had appeared to scream, “Nazis of the UK media, we demand freedom” before being detained.

Poor SuRie looked visibly shaken and there were a few seconds when she couldn’t sing as she didn’t have a mic. Once she got it back, she carried on with her performance like a pro, earning praise from viewers and pundits for her professionalism.

Rylan, who commentated on the Eurovision semi-finals, tweeted: “Our girl handled it so well GO @surieofficial. YOU SHOWED Europe what were all about.

Have to say @Eurovision security has been AMAZING this week honestly second to none. For that guy to get on stage he must of been very clever and quick. the Portuguese services that looked after us honestly are amazing.

Proud of our girl @surieofficial we love you x

“If you’ve got a message protest by all means but don’t frighten a young woman. Let’s tweet out girl how well she did get tagging @surieofficial.

“Have to say @Eurovision security has been AMAZING this week honestly second to none. For that guy to get on stage he must of been very clever and quick. The Portuguese services that looked after us honestly are amazing.

“Proud of our girl @surieofficial we love you x.”

Many fans reacted to Rylan’s tweet, with a bit of a divided response. One said: “That intruder was very quick and the security guy was just a second behind him, very impressive! So glad to hear everyone was looked after so well.”

But another tweeted: “Yeah, okay, but he still managed to get on stage. So how do you explain that?”

A third added: “Not that amazing, though! Anything could have happened to her.”

A statement from the EBU: pic.twitter.com/qiH1Df0MgW

A statement released by Eurovision organisers after the incident read: “The EBU regrets a stage invasion took place… The person responsible is currently in police custody.

Sadly for SuRie, she finished third from bottom, with Israel winning the competition.

He added: “She can go home with her head held high. She really is a national heroine after what she did tonight – it was extraordinary. I don’t know how she coped in those horrible circumstances.

“So, congratulations to SuRie. A lot of people will be watching her performance and cheering her on, and rightly so, because she did a terrific job for the United Kingdom and we’re just sorry that wasn’t reflected in the results.”

The identity of the stage invader has not been confirmed, but it’s been suggested it’s the same man who attempted to crash the stage at the National Television Awards in January.

Meanwhile, SuRie broke her silence on the incident via social media, simply tweeting: “Well, I’ve always said anything can happen at Eurovision…”

It’s been confirmed that SuRie is “okay” after the incident.