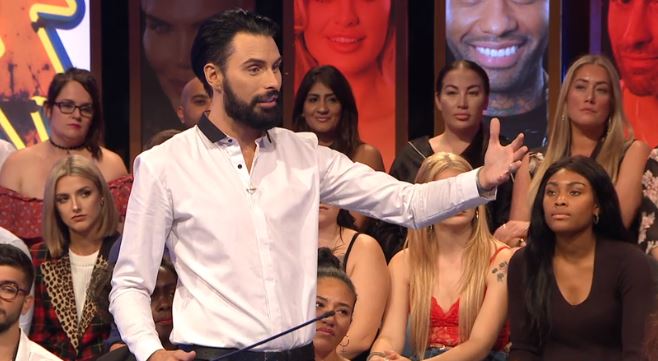 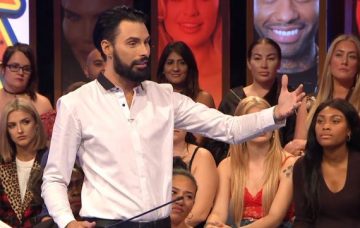 The former Emmerdale actress, 35, was interviewed by Emma Willis on Monday night’s episode, where she apologised to Ryan for accusing him of punching her during what appeared to be a play fight.

The incident led Ryan, who said there was no malice intended, to be given a formal warning by Big Brother and left his loved ones and viewers in outrage, claiming Ryan was just being playful.

Naturally, the interview was a topic of discussion on Big Brother’s Bit On The Side, where host Rylan was joined by Emma and Ryan’s brother, Scott Thomas.

Emma told the panel she’d found interviewing Roxanne an “uncomfortable” experience but said it had to be done given the accusation.

She said: “It was hard. It was quite uncomfortable but I think that’s what is necessary as we have watched a lot of uncomfortable television with Ryan over the last few days.”

Emma continued: “I feel like a lot of what she said was what she’d said [during her earlier interview with Jeremy Vine]. I suppose I wanted a bit more from her.

“We talked for quite a while and didn’t have time to put all of it in. There were various ‘what is the future for her and how has it affected her?’ but what about Ryan? Yes, he’s through it now, as far as we can see, but he will always probably have that paranoia in his head over everything he does now.”

When asked if she thought viewers had seen the “real” Roxanne, Emma replied: “I don’t know.”

Rylan then chipped in to give his view, saying: “I will probably get in trouble for saying this but, no, I don’t think it was.”

Emma went on to say: “There is no excusing her behaviour and I hope I straddled that line well because if she really does need help, the last thing you want to do is make her mental health worse. It’s a very hard line. But it’s also hard to know what to believe.”

Rylan said it had been hard for him to present a debate show and remain impartial at times when he thought about the fact this isn’t just TV and there is a family and feelings involved.

He told Emma: “All I will say is it was a fantastic interview and people will make their own minds up at home whether Roxanne was being genuine and if she was, great. But at the end of the day, Ryan has come out of this as an absolute gentleman and his family, [girlfriend Lucy Mecklenburgh] included, have handled this with dignity.

“For us, me and Emma, it’s been really difficult to watch this as well as the viewing public and we thank everyone for their support for Ryan and the show. We’ve really appreciated it.”

Ryan’s brother Scott told Emma he was grateful for how she handled the interview with Roxanne.

He said: “I want to say a massive thank you for not holding back or sugar coating it.”

Scott said Roxanne’s allegation had devastated the family, particularly their mum, saying: “She was on the phone in tears crying to my twin brother Adam. She just can’t get her head around it. It’s a bit different for us as we know how the reality game works but for mum she’s just seeing her baby boy crying on TV.”

He added: “You could see it in his eyes. He’s my big brother, like my dad, so to see him break down like that, his career in question, his whole life… it’s not just a reality TV show. Accusations like that are so serious. I was blown away by him and can’t wait to give him a cuddle.”

Scott praised Ryan for handling the situation like a “superstar” and said the overwhelming public support for Ryan meant the Thomas family didn’t need to speak out too much.

“We’ve sort of been able to sit back and let the nation do the talking,” said Scott, referencing the ‘Get Roxy Out’ chants at the previous eviction, which made Ryan break down in tears as he realised the public had his back.

In the interview with Emma, Roxanne apologised to Ryan, his family, friends and loved ones.

Roxanne said: “I’m the most hated girl in Britain right now. It’s a lot to deal with… it’s the title I feel everyone is giving me at the moment and all I can do is own it, accept it, apologise and try to take each day now bettering all of those things I’m realising.

Roxanne added: “I feel devastated. It cripples me with embarrassment and shame that I could have put somebody in that position, seeing the footage of Ryan in the diary room distressed…