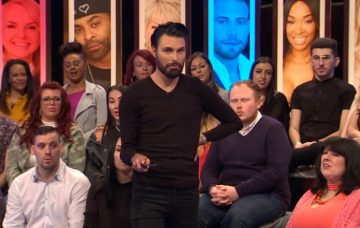 Rylan Clark-Neal has spoken out after being on the brunt of a series of critical tweets from former Big Brother champion Brian Belo.

The 29-year-old Bit On The Side presenter has said he’s unhappy his “loyalty” to the show has been questioned after Brian questioned if he only took the job for the fame.

Brian, 30, who won series eight of the show when it was on Channel 4 at the height of its popularity, took to Twitter to accuse both Rylan and Emma Willis of “ruining” BB since it moved to Channel 5.

BB superfan Brian said he felt obliged to speak out to try to save his beloved show from facing the axe.

In a series of tweets, he slammed the presenters, saying Rylan is only the Big Brother’s Bit On The Side host because he “wants to be famous” and Emma is trying too hard to emulate original host Davina McCall.

Criticising Rylan, he wrote: “When #Rylan got the ‘Big Brother’s Bit On The Side’ job at @bbuk I understood it because he had a high-profile from @TheXFactor and #CBB & #BBUK needed the publicity and his fame. But if #BBUK is going to get axed, we’ve got to say now, you’re not good enough!”

He added: “Trying To Stop Big Brother Getting The Axe | I keep thinking am I being, a bit harsh about the @bbuk hosts. Then I think, no! With #Rylan, it’s so obviously about fame with him. When you watch his first @TheXFactor audition, he so obviously couldn’t sing and he was the joke act.”

When it comes to Emma, Brian said: “We’ve already watched and loved Davina present @bbuk in this style, so we can tell when someone is just going through the motions, just because they want the prestige of the job position, rather than they want to do this show!” 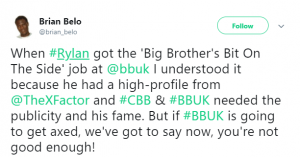 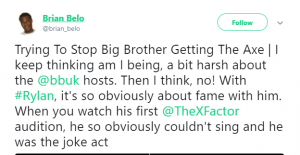 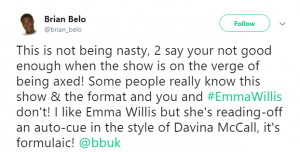 He went on to say of the pair: “If Big Brother is about to get axed, then I’m going to have to say, I don’t care, if your profile is higher than mine and you do @thismorning and you are in The British Media Circle clique! You guys as hosts are not very good and you’re ruining Big Brother.”

Now a confused Rylan has also taken to Twitter to respond.

The This Morning presenter shared flattering tweets Brian had sent him in 2015 as he wrote: “Regarding the Brian story I gotta say it’s quite unusual. Always been a massive supporter of Brian and I thought him of me? As below. Not sure what’s changed in a couple of years but sincerely hope he is well. Can’t @ him as he’s blocked me? BUT I do need to say another thing…”

He continued: “Have a view on me as host by all means but DON’T EVER question my loyalty or love for BBUK I adore the show and have done also since 2000.” 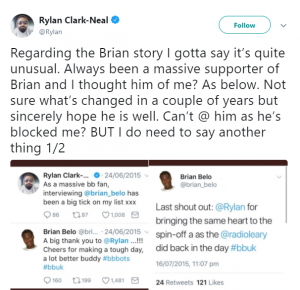 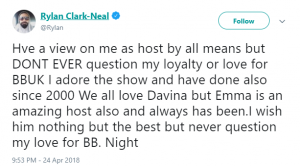 Sticking up for Emma, he said: “We all love Davina but Emma is an amazing host also and always has been. I wish him nothing but the best but never question my love for BB. Night.”

In a final tweet, Rylan said he had no hard feelings towards Brian, writing: “Genuinely wish Brian Belo well and will continue to be a fan of him as a housemate as I always have. X”

On Monday, it was rumoured that Channel 5 is axing Big Brother spin-off Bit on the Side and replacing it with its predecessor BB’s Little Brother in a last-ditch bid to save the show.

Bosses apparently hope to revive its fortunes by falling back on BB’s old companion show, which was hosted by Dermot O’Leary and then George Lamb.

It is thought Rylan will continue to host the spin off show having fronted Bit On The Side for the last few years.

However, Brian has made it clear he thinks this is a mistake. He said the show needs a “new breed” of presenters.

Brian also said the standard show should be aired in January instead of the celebrity version, as that’s when people are more likely to be staying in watching telly. He added that stars aren’t needed as, “you can have a humongous television show with no famous people in it.”

Brian said the show needs to go back to its roots and show more of what people loved about it ten years ago if it wants to compete today with the likes of Love Island.

Do you agree with Brian about Rylan and Emma “ruining” Big Brother? Leave us a comment on our Facebook page @EntertainmentDailyFix and let us know what you think!