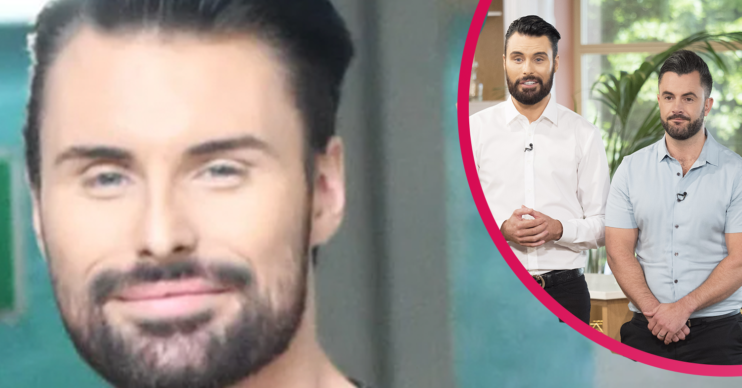 Cameron is actually the son of Rylan's hubby Dan Neal

Rylan Clark-Neal has been forced to correct fans after they mistook stepson Cameron for his husband.

The 20-year-old is the son of Rylan’s husband Dan Neal, from an earlier relationship.

Taking to Instagram yesterday (July 22), the former Big Brother star revealed he “couldn’t be prouder” of Cameron after he was accepted into the London Academy of Music and Dramatic Art.

Well I’m a proud one tonight. Our boy has been accepted to LAMDA !!! Completely overjoyed and so proud well done @cam.neal xxxxx

He shared a rare snap alongside his stepson as they marked the news with a celebratory drink.

Rylan, 31, wrote: “Well I’m a proud one tonight. Our boy has been accepted to LAMDA !!! Completely overjoyed and so proud well done @cam.neal xxxxx.”

And while most fans rushed to comment their support, others were left slightly confused.

A third even thought Cameron was his brother, saying: “Omg they look alike I thought they was brothers😂 😂 .”

Other users were also left scratching their heads over LAMDA – the renowned drama school based in Hammersmith, London.

The confused comments didn’t go amiss with Rylan, who later added: “For those confused. LAMDA is a drama school and Cam is my step-son x.”

Rylan met his husband Dan after his stint on Big Brother in 2013.

At the time, the TV star was hosting the show’s spin-off series Bit On The Side.

They later got engaged in September 2014 and tied the knot in November 2015.

His relationship with Cameron is just as good, with the youngster calling him a “cool second dad” in the past.

Speaking about being a stepdad during an interview with the Mirror, Rylan said: “I’m the best! I bought him a car, so there you go! Who pays the insurance? Who do you think?

Rylan has previously opened up on starting a family of his own, admitting he’d take a year off work to focus on fatherhood.

He told The Sun: “I’m already a stepdad but, of course, I’d like to have kids. Since day one I’ve always wanted kids. I love babies.

Read more: Ruth Langsford hits back as This Morning fan complains about her ‘frumpy’ outfits

“It is definitely something that we will talk about and discuss if, how, when and why. It’s doable. It’s always on the table, it’s just when the time is right.