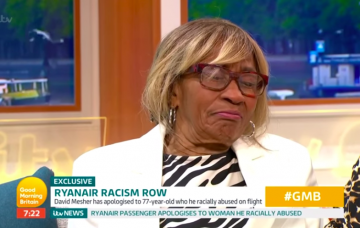 Ryanair ‘racist’ apologises to victim on live TV – and is rejected

It was a story that went viral, thanks to its shocking, racist content – and now the subjects of the video have come face-to-face for a showdown on live TV.

And it didn’t end well.

Birmingham resident, David Mesher appeared on Good Morning Britain on Friday to offer an explanation for his appalling behaviour on board a Ryanair flight earlier this month.

He was filmed arguing with elderly passenger, Delsie Gayle, 77, and calling her an “ugly, black [bleep]” on board the plane from Barcelona on 19 October.

He also told her: “Don’t speak to me in a foreign language, you stupid ugly cow.”

This morning David, who has reportedly been interviewed by police over the disturbing incident, appeared on ITV’s Good Morning Britain to say sorry for his actions.

Speaking for the first time on the ITV show, David said the fight had started over a seat dispute.

He said he had asked the widow to move from her seat but “she didn’t seem to want to get up”.

Speaking in a pre-recorded segment David said he “absolutely” regrets his actions, saying: “I probably lost my temper a bit and ordered her to get up.

“I’m not a racist person by any means and it was just a fit of temper at the time, I think.”

In the studio with presenters Ben Shephard and Charlotte Hawkins, was victim Delsie, who looked visibly emotional, along with her daughter Carol.

David told her: “I apologise for all the distress you’ve had there and since.”

“I don’t think he knows what he’s put my mum through.”

Charlotte asked if Delsie could accept his apology and she replied: “I don’t think so. You must forget and forgive but it’s going to take a long time for me to get over what he has done to me.

“I’ve never been through anything like that in my whole life. It’s really upsetting watching that.”

The interview followed Delsie’s comments last week, where she admitted the incident had left her “depressed”.

She told ITV News: “I feel very low. He paid a fare to go on holiday, I’ve paid mine, so why does he abuse me for that due to the colour of my skin?

“I feel really really depressed about it. I go to my bed and say, ‘What have I done? I haven’t done anything.’ I don’t know when I’m going to get over it, because every time I remember it, I cry.”

Her daughter comforted her, telling her mum: “It wasn’t your fault,” and saying she wants an apology from Ryanair.

Ryanair have since released a statement, saying: “Ryanair only became aware of this video late on Saturday 20 October,” adding that it “immediately reported this video, and the racist abuse, to the Essex Police in Stansted Airport at 9am on Sunday 21 October.

“We provided the Police with a copy of the video, and relevant details of the two passengers involved. These prompt actions disprove the false claims that Ryanair did not respond ‘quickly’ or ‘appropriately’ to this video. To allow the Police investigation to occur, Ryanair declined to comment to media despite the considerable and inaccurate media commentary.”

The airline claimed they wrote to Delsie to apologise for the incident and insisted the matter had been reported to the police and being treated with the “utmost attention and urgency” by Ryanair.

However, Delsie claims she didn’t receive an apology from the airline.

They concluded the lengthy statement: “We again extend our very sincere apologies to this passenger for the regrettable, and unacceptable remarks that were made to her by an adjacent passenger, and we believe that by reporting this matter immediately to the Essex Police and by apologising in writing to this customer early on Sunday morning, Ryanair treated it with the urgency and seriousness it warranted.”

This was a truly nasty incident. We just hope Delsie can come to terms with what happened to her.

Do you believe his apology was genuine? Leave us a comment on our Facebook page @EntertainmentDailyFix and let us know what you think.