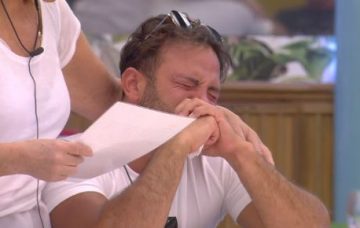 He received a letter from brother Scott on Tuesday night

Ryan Thomas was left sobbing on Tuesday’s Celebrity Big Brother when he received a letter from home telling him not to worry about the Roxanne Pallett punch drama.

Viewers took to social media in droves to share their relief that Ryan, 34, now knows the public has been supporting him and he has nothing to worry about when he leaves the house.

The former Coronation Street star had been upset over Roxanne’s allegation he punched her during what appeared to be a play fight and worried about what people on the outside world may think.

Roxanne, who quit Big Brother last week, has since apologised to Ryan and said she “got it wrong”.

Ryan couldn’t stop his tears as Psychic Sally read Scott’s letter which began: “Dear Ryan, I don’t think this is a surprise to you but it’s Scott writing this letter. You know I love a good essay!

“Honestly, bro, I can’t tell you how proud we all are of you. You have really taken yourself out of your comfort zone and, trust me, it’s been well worth it.”

While Scott did not directly reference the Roxanne allegation, he alluded to the situation by writing: “You’ve shown the nation just how amazing you really are and carried yourself so well. I know you’ll be worried about how you’re coming across but we want you to know you have absolutely nothing to worry about and everyone has seen the real you.”

Scott said Ryan’s daughter Scarlett, nine, had been shown some clips of him on Big Brother and was so proud.

He wrote: “She can’t get her head around it but she smiles from ear to ear when she sees her daddy having so much fun.”

Scott also said Ryan’s girlfriend Lucy Mecklenburgh is “more than proud” of him and “so happy that everyone gets to see the Ryan she knows and loves.”

He concluded: “Keep doing us proud, see you on the other side.”

Fans loved the scenes and shared their happiness on Twitter that Ryan’s mind had been eased in regards to what is happening in the outside world.

i'm so happy ryan got his letter from scott he deserves it after what he has been put through these past couple of days. i'm also a mess after listening to sally reading the letter but so happy for him ❤ #cbb @ryanjamesthomas @scottyspecial pic.twitter.com/II2vWtfDdd

Ryan needed that letter more than anyone else in that house. Ryan just needed to know and to see the relief and emotion on his face was everything #CBB

Good to see Ryan get his letter to reassure him. Best way of doing it, letters from home is the only acceptable outside contact, well done B.B. for still giving him reassurance without bending the rules. #CBB @bbuk

Roxanne tearfully claimed last week that Coronation Street’s Ryan had punched her deliberately during what appeared to be a play fight in the kitchen.

She slept in a separate bedroom that night after saying she felt uncomfortable.

A confused and upset Ryan, who apologised and said there was no malice or anger in his actions, was given a formal warning from Big Brother, resulting in outrage among his family, friends and viewers.

Ryan’s girlfriend Lucy and his mum Gail have both called for Ryan’s warning to be revoked.

Roxanne appeared on both Jeremy Vine and Celebrity Big Brother on Monday to apologise to Ryan.

She has described herself as “the most hated girl in Britain”, saying: “For Ryan, his family, friends, colleagues and everyone I’ve affected by such an enormous reaction that could have been devastating for him, all I can say is I’m devastated and I’m sorry.

What are your thoughts on this series of CBB? Leave us a comment on our Facebook page @EntertainmentDailyFix and let us know what you think