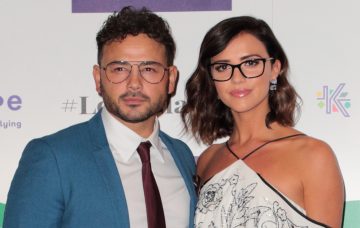 Ryan Thomas has shared the sweetest photo of his girlfriend Lucy Mecklenburgh and daughter Scarlett to celebrate Valentine’s Day.

The former Coronation Street actor posted the snap to Instagram on Thursday showing Lucy with her arms wrapped around Scarlett, who pulled a playful pose with her hands below her chin.

Fans couldn’t get enough of the picture, with many telling Ryan he’s a “lucky man”.

One person said: “This photos so beautiful!! Lucky man you are,” while another wrote: “What a gorgeous photo!”

A third commented: “You are very lucky Ryan to have two beautiful ladies in your life.”

Ryan shares his daughter with his former Corrie co-star Tina O’Brien, who he dated from 2003 to 2009.

In December last year, Ryan and Lucy suffered a blip when she was accused of getting close to another man in Dubai – an allegation she denied.

But Lucy called the cheating claims “ridiculous” on Twitter.

She said: “Since when has saying goodbye to a friend turned into a cosy night out?! 🤣 #ridiculous?”

At the time, Ryan was said to be distraught by the video but he and Lucy have remained together.

It came after the pair spoke about having babies and getting married earlier that month.

Ryan told OK! magazine: “I think Lucy wants me to propose next year!”

She said: “You’d better get saving because I want a really heavy left hand [laughs]”.

Former TOWIE star Lucy added: “I wouldn’t waste my time with someone if I didn’t think we were on the same page about children and getting married. I know we both want the same things in the future.”