Over the weekend, the actor, who turns 35 tomorrow, shared a snap from his decked out room at the swanky Mandrake Hotel in London.

With a glass of red wine in one hand and surrounded by an amazing array of pastel coloured balloons, Celebrity Big Brother winner Ryan is grinning from ear to ear.

Wanted to stay at this hotel for ages! Early birthday celebrations start here!

Wanted to stay at this hotel for ages! Early birthday celebrations start here, thank you so much @lucymeck1 totally unexpected 🎈 💫

"Wanted to stay at this hotel for ages! Early birthday celebrations start here, thank you so much @LucyMeck1 totally unexpected," he excitedly wrote.

On Saturday the pair were joined by former Corrie star Richard Fleeshman, who was also celebrating his birthday.

Both in good spirits, Lucy shared a video of the two actors playing the piano and singing together outside a London restaurant. 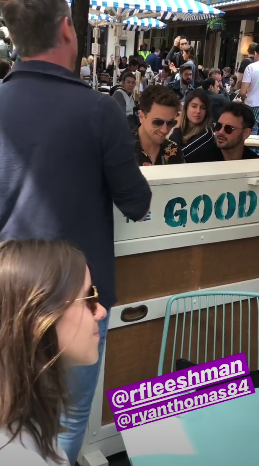 Ryan and Richard then ditched the girls and took a boat out along the Thames with Dean Gaffney and another couple of pals.

Later that night, Ryan met up with Lucy again and they headed along to Sushi Samba in Covent Garden, where Lucy shared a series of snaps of herself tucking into lots of yummy looking food.

The blissfully loved-up couple are always sharing pictures from their fun dates, and recently spent the day at Epsom Races.

The former TOWIE star shared a shot of them both dressed to impress for their day out, with Lucy looking lovely in a pale pink dress and hat, while Ryan looked dapper in his black top hat.

The pair have been dating since early summer 2017 after Ryan won over Lucy while filming Celebrity Island with Bear Grylls.