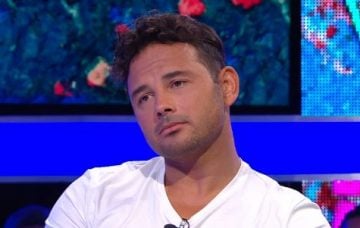 The former Coronation Street star, 34, was left distraught when Roxanne, 35, accused him of punching her during what appeared to be a play fight.

She later quit the show and, after watching the footage back, admitted she’d “got it massively wrong” and issued two public apologies to Ryan and his loved ones.

Ryan left the Big Brother house as the series winner on Monday night and was told by Emma Willis that Roxanne had now apologised over the allegation.

“I appreciate that,” said Ryan.

When Emma asked if he could forgive Roxanne, he said: “For me, I have the best network of family and friends. I have the best mates in the world. Some are here today. That’s what is important.

Ryan said Roxanne’s allegation was “totally unexpected” as he viewed his actions as a “sign of affection” he’d used on the other housemates including Gabby Allen.

He told Emma: “It was unexpected because there was nothing in it and as it unravelled, as it became bigger and bigger, the thing that scared me the most was when Ben told me she couldn’t stay in the room with me because she was scared. That for me, rang alarm bells.

“Then the game became real life for me.I don’t know how much they showed but I did break. I had no choice. I was a scared little boy.”

Ryan continued: “I just wanted out. To be with my manager who could maybe protect me as I felt like I could be getting a call from the police very soon for doing something untowards to a woman which isn’t me. I was glad we had 24 hour surveillance on it because the point was proven.”

The ex-soap star was also quizzed on Roxanne’s allegation during an appearance on Bit On The Side after the main show, where he made it clear he doesn’t want to dwell on it right now.

“Beyond a doubt it was the only time I was really scared and I think anybody in my position would be that way, and you have to deal with it there and then, which hopefully I did.”

When asked if he will ever “get over” the allegation, Ryan said: “You’re so isolated in there. Even this is very daunting, being around people I don’t recognise. I’ll deal with it another time because I don’t know what happened.”

Roxanne had told Emma in her Celebrity Big Brother interview last week: “For Ryan, his family, friends, colleagues and everyone I’ve affected by such an enormous reaction that could have been devastating for him, all I can say is I’m devastated and I’m sorry.