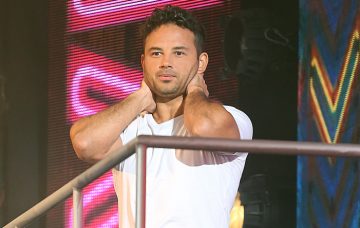 He left Celebrity Big Brother as the winner on Monday night

Ryan Thomas has thanked fans for their support after leaving Celebrity Big Brother and finally getting to see the reaction to the Roxanne Pallett ‘punch’ controversy.

The former Coronation Street star, 34, said he was “overwhelmed” by the wave of support he received following Roxanne’s allegation he punched her during what appeared to be a play fight.

She later quit the house and publicly apologised to Ryan, saying she “got it massively wrong”.

But as Ryan was cooped up in the Big Brother house until Monday, he had no idea how the public had perceived the incident or what had happened.

Now, however, he’s out of the house – as the winner! – and has seen first-hand how much support he received.

He said: “Absolutely overwhelmed with the love and support I’ve received, you’ve no idea how much it means to me.”

The former soap star also shared a photo of a huge billboard on the side of a building back home in Manchester, saying the people were behind him.

He said: “This blows my mind, thank you so much Manchester.”

Ryan left the Big Brother house as the winner on  Monday night and was reunited with girlfriend Lucy Mecklenburgh and his twin brothers Adam and Scott, 30.

Scott also shared a billboard screen from Manchester, which had been updated to reflect Ryan’s big win!

The former Love Island contestant shared a string of pics with fans showing Ryan with his loved ones the day after the finale, enjoying drinks at an outside bar.

Clearly thrilled to be reunited with Ryan, Scott simply captioned the snaps: “He’s back!”

Ryan spoke in his winner’s interview with Emma Willis about how important family is to him, saying his brothers mean the world.

Ryan was joined by Lucy, Scott and Adam at the Celebrity Big Brother wrap party, where the boys wasted no time in roping Emma in for a fun photo!

They were seen hoisting the TV presenter into the air as she beamed for the camera.

Scott said: “Still can’t get my head round last night! My big bro the champ.”

Adam added: “What a night !! Couldn’t be happier deserves everything and more !! Thanks to everyone that voted you made 3 boys very happy much love you beautiful people x.”

Ryan was asked by Emma during his CBB winner interview whether he could forgive Roxanne for her allegation.