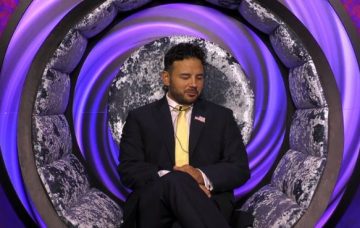 Ryan Thomas breaks down over “life in tatters”

The star confided in Sally Morgan amid CBB 'punch' storm

Ryan Thomas has broken down in tears and described his life as being “in tatters” after Roxanne Pallett’s claims he had ‘punched’ her.

Eagle-eyed viewers saw Ryan cry during the live feed of the C5 show late on Friday night as he confided in TV psychic and fellow housemate Sally Morgan.

According to The Mirror, Ryan’s tears came after Sally asked how he was feeling following Roxanne’s accusations that he had ‘repeatedly punched’ her in the ribs.

Ryan is said to have replied: “Really, really really bad. I just don’t get it

Apparently, Ryan then yelled, “F****** get me out of here now!” as his frustration boiled over.

The actor and former soap star then admitted to Sally: “I feel emotionally absolutely battered.

“It came from nowhere, absolutely nowhere.”

It is not known whether the scenes will be included in Saturday night’s episode of the reality show, which will air on C5 at 9pm.

Meanwhile, it has since been confirmed that Roxanne has sensationally quit Celebrity Big Brother.

News of her walking broke early on Saturday morning, with a spokesman for the show saying: “Roxanne has decided to leave the BB House.

“The remaining housemates have been informed.”

Roxanne’s rep has since said that she made her decision to leave on Friday night.

“Roxanne decided to leave the CBB house late last night after deliberating for two days with some sensitive issues she felt strongly about,” they said in a statement.

Following the episode in which Roxanne claimed Ryan had ‘punched’ her, media regulator Ofcom has received 11,215 complaints from viewers.

Ryan’s former soap star brother Adam has confessed the controversy left him in tears too, while Roxanne’s ally in the CBB house, Ben Jardine, has said he felt “played”.

Ben was given his marching orders from the show during Friday night’s eviction before host Emma Willis showed him the footage of what happened with Roxanne and Ryan.

Viewers had previously seen Roxanne take Ben into a toilet before apparently ‘demonstrating’ how Ryan had ‘punched her repeatedly’.

But on watching the footage, Ben admitted: “It breaks my heart. Now I feel like I’ve been mugged right off.