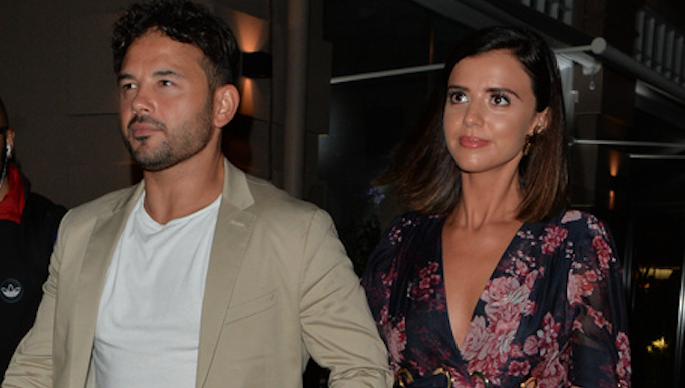 "Can I just tell them please?" he asked her on social media

Celebrity couple Lucy Mecklenburgh and Ryan Thomas are expecting their first child together – but it seems they don’t agree about one significant aspect relating to pregnancy.

A website report claims Lucy has revealed both mum-to-be and dad-to-be opted to find out the baby’s gender.

It is also claimed the engaged pair had settled on not making the result public.

But now it seems ex Corrie star Ryan may be having second thoughts after he hinted he wants to do a big reveal.

Instagram vs Reality 🤢 – – One thing I will promise all of my followers is I will be very open & honest about my personal pregnancy journey. – I have just uploaded the first instalment of 💕Lucy’s Baby Blog💕Ive mainly focused on morning sickness as this has been the main subject in my DM’s for the past few weeks. I will always cover what you guys want, so please write a comment below with any blog ideas & feedback. – – ☝🏽Click the link in my bio to check it out☝🏽

Bantering with fans over social media last night, the 35-year-old responded to one question asking him about whether he intended to keep the gender under wraps.

Ryan replied via Instagram Stories: “I don’t know I just want to tell everyone @lucymeck1 keeps stopping me! Can I just tell them please?”

But it may be that his 28-year-old fiancée is hoping to release the happy news before the birth herself.

Lucy previously teased the huge announcement could be an event as she spoke in a social media video showing an envelope said to contain the result.

“Oh my God, my gender results!” she is reported to have said.

“I want to open it so bad! It’s going to kill me, this. I’m gonna have to hide it somewhere.

“Can someone come and pick it up please and hide it for me?”

Having announced the pregnancy on Lucy’s birthday in August, she has since detailed in a blog how she has struggled with morning sickness.

Body image 🤰💕 . . . . Although trying to keep this under wraps especially whilst on holiday really wasn’t easy 😅 I’m now over 12 weeks and I’m starting to fall in love with & embrace my new, ever changing… ever expanding body. . I’m in awe of what my body is doing, creating another human! Yes 1 human I was worried with how big I got very quickly it was twins haha! 😅 . for the first time I feel content in myself and how I view my body. It feels like as soon as I became pregnant my priorities changed and I must admit this is definitely for the better. . My journey hasn’t been plain sailing the 1st 3 months have been pretty brutal and quite lonely as you can’t really talk about it & feel like your lying to everyone constantly. So now I’ve had a little more down time (mainly with my head down a toilet!🤢🤮) I’ve been writing a blog about my pregnancy journey so far and there’s no filter! I wanted to share my highs & LOWS!! I’m just finishing it and I’ll share the first instalment with you guys soon 😘🤰🥰 #1sttrimester #pregnancy #bodyimage #babybump

“I am SO tired,” she wrote after an interrupted night’s sleep.

“Sleeping on a towel, on the bathroom floor, is actually possible and it’s not because I’m drunk (although I do feel like I’m hungover most of the time, just without the fun night before).”

ED! has approached reps for both Lucy and Ryan for comment.