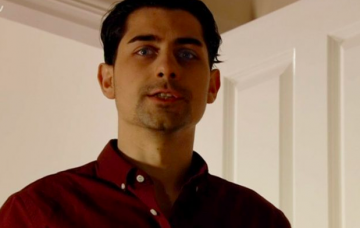 That smug expression is hiding some serious darkness

Coronation Street’s Ryan Clayton has offered his insight into the character of Josh, and has confirmed his belief that David is not his first victim.

“Oh yes, that was always in my head that he’d done it before, definitely,” he’s said in an interview with What’s On TV.

This likely won’t come as a shock to most Corrie viewers, who saw the mechanic brazenly turn up at David’s house the day after the rape, armed with a smoothie.

And since David challenged him about the assault he has swaggered around the Street, that smug grinned permanently fixed on his face.

These are surely not the actions of a man who has committed such an offence for the first time, rather one who has full confidence he will get away with it.

Well, his ‘luck’ could be about to run out on that front, as Shona now knows what he did and is determined he won’t get away with it.

And this will definitely rattle Josh, Ryan reveals…

“He’s all front and will try to look as calm as he possibly can be, but I think there is a moment of panic.

“This hasn’t happened to him before. There are many people that Josh needs to be wary of in his past, but this is the first time that he’s been confronted by someone.”

Fearless Shona confronts Josh in the street, branding him “rapist”.

“The next time she sees Josh, her emotions get the better of her and she tells him she knows that he raped David,” actress Julia Goulding explains to the Radio Times.

Next week Shona visits David in prison and pleads with him to tell his solicitor Imran Habeeb that Josh raped him.

But her pleas fall on deaf ears and when she tells David that she confronted Josh herself, he gets very upset.

Imran pushes Shona for details on the extenuating circumstances she’s clearly alluding to, but will she tell him about David’s ordeal at Josh’s hands?

Later Shona pops into the garage, finds Josh’s CV and steals it, planning on finding out about his past from former employers.

She heads to the last place of work listed on the CV, determined to find some dirt on him that will help her make him pay for what he did to David.

When she meets one of Josh’s former colleagues, he reveals to her how Josh was sacked and Shona is intrigued.

Is SHE about to stumble upon another victim?

What do you think is lurking in Josh’s history? Head to our Facebook page @EntertainmentDailyFix and let us know what you think!