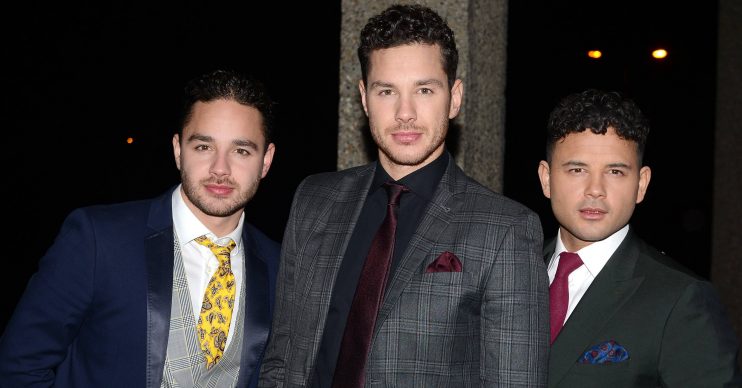 Fans have hailed the mother of brothers Ryan, Adam and Scott Thomas for bringing up “such brilliant men”.

The tributes to Gail were started by Love Island star Scott, as he shared a picture on Instagram of himself with his mum and two brothers.

The PR director captioned the family photo: “Momma did good if you ask me.”

His followers unanimously agreed and commented in their hundreds to praise Gail.

“Couldn’t agree with you more Mr. Scott,” one wrote.

“Momma did real good, she raised three exceptional young men who are just lovely,” said another.

“She must walk round like proud was a jacket,” said a third, while a fourth said Gail is, “just a remarkable lady.”

A fifth said: “I agree mummy did very well to bring up such brilliant men,” while another agreed, writing: “Momma did good indeed. I feel like high fiving her.”

A further fan joked: “Thank you for having these Handsome men to look at,” while another commented on the “set of good genes” shown in the photo.

Coronation Street actor, Ryan, 33, is Gail’s oldest son with Dougie James, who was once part of a blues band who toured with the Jackson Five.

They then had twins Adam and Scott, 29, who also went into the world of showbiz – Adam as an actor in Waterloo Road and Emmerdale, and Scott as a reality TV star on Love Island.

Adam also proved popular when he appeared on I’m A Celebrity, where he finished third in the 2016 series.

On the show, he often spoke about how much he missed his family and how close they all are.

Before he went on Love Island, Scott also talked about how his brothers are his “best mates”.

Read more: Ore Oduba and his wife Portia share pictures of their first trip away with baby Roman

He told the Radio Times there is no sibling rivalry: “I’ve never been jealous… they’ve been amazing. They’ve never made me feel that way, looked after us, took us everywhere. I’ve had an amazing life off the back of my brothers, I’ve got to where I am.”

Ryan and Adam have so far given Gail two grandchildren – with another on the way.

Ryan has daughter Scarlett, nine, with former partner, Tina O’Brian, while Adam has a son, Teddy, three, with his wife, Caroline. She is due to give birth again in the next few weeks to their daughter.

Are you a fan of the Thomas family? Leave us a comment on our Facebook page @EntertainmentDailyFix and let us know what you think!