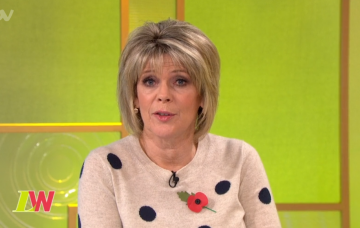 She married Eamonn Holmes in 2010

Ruth Langsford has opened up about her wedding day to husband Eamonn Holmes.

During Monday’s Loose Women, Ruth and her fellow co-stars discussed their “wedding day regrets” and Ruth said she would have changed her hair colour if she was to do the big day all over again.

She also said she would have wanted the weather to be different because it was “a bit too hot”.

Speaking about her summer wedding, Ruth said: “If there was one thing I could have changed about our wedding, well I wouldn’t change anything really, but it was so hot.

“We had the hottest day of the year and it was a bit too hot.

“And I also had weird coloured hair. Remember when I had that hair disaster when I had all the blonde taken out of my hair and I went really dark, which was awful, it didn’t suit me at all.

“I was gradually trying to bring it up to blonde through the colour spectrum and it was like a gingery-brown.”

Ruth went on to tell a funny story about her wedding day which involved TV presenter Christopher Biggins.

She explained: “Christopher Biggins was at our wedding and in the morning, I wasn’t there, but Eamonn and his brothers were sitting outside because it was a beautiful day and Chrispher came out on the balcony in his pants and said, ‘Eamonn, this could all be yours!'”

Eamonn and Ruth are one of the UK’s most famous husband and wife presenting teams however back when it all started, it seems Ruth, 58, wasn’t as keen to initially go down that route.

In an interview with Best magazine last month, Eamonn, 58, recalled how their journey began back in 2002.

“There was an idea to have a special This Morning for the Queen’s Golden Jubilee and put my wife, Ruth, and I on together,” he said.

“After that, the executives had the idea to make it a regular thing. Ruth was very anti it. She went, ‘No way!’ She said I made her nervous – she didn’t want to be an on-air couple at all.

“Ruth didn’t want me on it, and I don’t think she’s ever wanted me on it since, to be honest!”

Read more: Eamonn Holmes reveals he was hospitalised after panic attack on air

Thankfully for us, Eamonn and Ruth’s television partnership did endure and they’ve come fan favourites among many This Morning viewers.

The couple currently present Fridays on This Morning and serve as relief presenters when regular Monday to Thursday co-hosts Holly Willoughby and Phillip Schofield are on holiday.

Could you work with your partner? Leave us a comment on our Facebook page @EntertainmentDailyFix and let us know what you think!