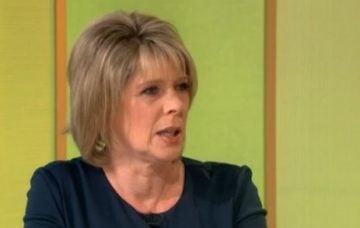 The 58-year-old told Wednesday’s panel on Loose Women she thought it was a “rude and insulting” to want to “merge” the two men.

On Tuesday night’s episode of Love Island, Kendall told Niall her head was all over the place when it came to who she liked more: Niall or Adam.

Kendall told him: “You’re two completely different people. I think if I could merge you together…”

Well, Ruth was NOT impressed!

“I thought that was really insulting.”

Stacey Solomon agreed, chipping in: “It is really insulting. Imagine if he’d said that about her: ‘I could take a part of you and mix it with a part of this woman over here.’ People would have been outraged by that.

“I actually think it was mean.”

Ruth replied: “Just imagine if he’d said to her, ‘You’re a lovely girl but if I could have that body with your personality.’ I thought he was really upset.”

If you haven’t watched Love Island, basically Kendall and Niall were coupled up on the first episode, before newcomer Adam arrived and stole Kendall away.

It left her utterly confused as to which guy she liked better, which is what led to the chat with Niall.

Niall admitted he wasn’t happy about Kendall had said and later called her up on it, prompting Kendall to defend herself and insist she hadn’t meant it in a derogatory way.

A tearful Kendall: “Oh, it wasn’t like that at all! I meant because he was serious, conversation-wise when we sat down and had a chat… I just wanted to get to know you deeper rather than just us having banter.”

She added: “I’m really sorry. I’m not a malicious person and would never say anything to hurt you.”