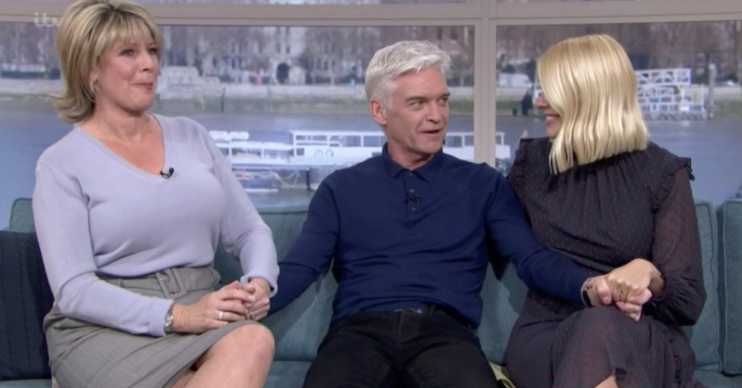 Came after his shock announcement

Their relationship has been plagued by rumours of a feud in recent months.

However, Ruth Langsford and Phillip Schofield appeared to put all of that behind them as the pair hugged each other live on air today (February 7).

Today’s This Morning opened with Eamonn Holmes and his wife and co-presenter Ruth revealing that Phillip wanted to speak openly about his decision to come out.

After Phillip was interviewed by his good friend and co-host Holly Willoughby, they invited Friday hosts Eamonn and Ruth to join them on the sofa.

“We’re all part of this family,” said an emotional Holly. “Eamonn and Ruth, come in.”

With their arms outstretched, Ruth and Phil walked towards each other, as Ruth gave Phil a heartfelt hug.

Sitting down next to him, with her arm wrapped around him, Ruth asked Phil if he was felling “better”.

Eamonn said: “Nobody should be embarrassed about their sexuality.”

“It’s fantastic that you have spoken out and there are so many people who will be strengthened by what you have said,” Eamonn said.

“We, as Holly said, are by your side. We will be the first to stand beside you,” Eamonn added.

We, as Holly said, are by your side. We will be the first to stand beside you.

“They’re all that matters,” Ruth added as she held Phil’s hand.

“And breathe,” Ruth added as Eamonn joked that he thought Phil was going to “come in and resign”.

Putting their feud to bed, as Phil placed his hand on her knee, Ruth concluded: “I’m proud of you.”

The pair have been surrounded by rumours of a rift backstage at This Morning in recent months, with some suggesting that Ruth made an official complaint about Phillip amid reports of a “toxic atmosphere” behind the scenes on the ITV show.