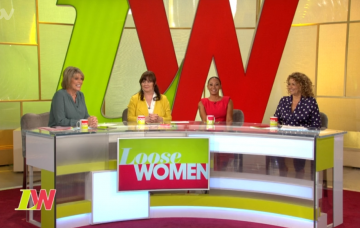 Ruth Langsford admits she would love a Corrie role

Could we ever see Ruth Langsford heading to the cobbles of Weatherfield?

Well, the presenter admitted she would “love” to be part of the Coronation Street cast during Wednesday’s Loose Women.

After guest panellist Mel B revealed to viewers that she had previously had a cameo in the ITV soap, Ruth, 58, expressed her desire to be a Weatherfield resident.

“I’m gutted, I’d love to be in Coronation Street, just in case anyone’s watching,” Ruth said. “Any of the producers.”

Revealing what kind of storyline she would like to be part of, Ruth admitted: “I want to have a hot affair with someone: Norris [Cole (played by Malcolm Hebden)].”

As she burst into laughter, she added: “Be careful what you wish for!”

But unfortunately, it seems Ruth’s dream of joining Corrie may not be coming true any time soon.

Her confession came after Spice Girl Mel revealed she was an extra on the soap.

Mel, 42, revealed she had a role on the soap years ago as a shop worker stacking shelves.

If Ruth was to appear on the soap, she wouldn’t be the first famous face to visit Weatherfield.

Sir Cliff Richard, Peter Kay and Cilla Black have all made appearances on the soap.

The presenting duo are set to guest star in an episode of the soap as part of Rosie Webster’s exit story.

Helen Flanagan, who plays Rosie, is heading off on maternity leave and Corrie boss Kate Oates revealed Holly and Phil will be bringing “a bit of fun” to Rosie’s exit scenes.

“Phillip Schofield and Holly Willoughby are coming in for a bit of fun and part of Helen Flanagan’s exit story,” Kate told the Metro.

“We’re kind of replaying a bit of a trick we have used before because Rosie has already been on shows but it will be great comedy.”

Speaking about her upcoming cameo during Tuesday’s This Morning, Holly admitted she was “so nervous.”

“Literally in the last commercial break our script has been delivered,” Phil said, as he flicked through the script pages. “Look at all your lines!”

“I know!” Holly shrieked. “I’m not very good at this sort of thing.”

“Listen, you can all forget about winning a soap award because we’re about to record the best scene you’ve ever seen,” Phil later joked.