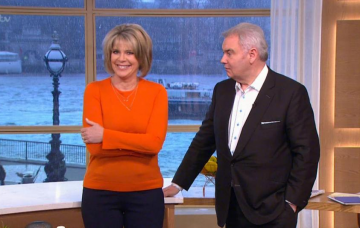 Get a room will you!

Eamonn Holmes can be, as we all know, a wee bit on the cheeky side when the mood takes him.

But we’re not sure even he would be so bold as to attempt what his wife jokingly accused him of on live TV!

The husband and wife presenting team are currently standing in for usual suspects Phillip Schofield and Holly Willoughby on This Morning, and love to wind each other up on screen.

Case in point: on Thursday’s episode, Ruth jokingly suggested her husband had touched her bottom live on air!

It happened when 57-year-old Ruth and Eamonn, 58, came back from a break and were standing next to a counter on the set of the show.

Read more: Matt and Emma Willis enjoying half term fun on the slopes

As Eamonn was starting to talk, he moved his arm towards the counter and went to lean on it just behind Ruth.

Obviously feeling his hand brushing past her, Ruth suddenly stopped and looked down towards her bottom and said: “Did you just touch my bottom? I think you did!”

“It was very nice, I was just wondering what you were doing?” she giggled to a very stern looking Eamonn.

Eamonn, of course, was having none it and said: “I was just leaning on the counter,” as he moved his hand back behind Ruth again.

After losing his train of thought when ‘bumgate’ stopped him in his tracks, he announced that tomorrow would see Ore Oduba and Davina McCall hosting the show.

Looking forward to it, guys!

Do you prefer This Morning when they try out other presenters, or would you rather watch the same people like Phil and Holly and Eamonn and Ruth? Leave us a comment on our Facebook page @EntertainmentDailyFix and let us know what you think!