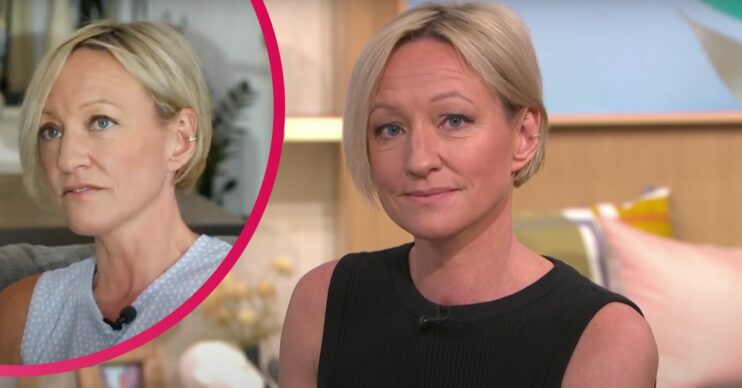 Ruth endured a nine-year nightmare married to her ex-husband

Jonathan Wignall was jailed for coercive and controlling behaviour last year. He was also handed a restraining order against his ex-wife.

What happened between Ruth Dodsworth and her ex-husband?

In 2002, Ruth and businessman Jonathan Wignall got married. They had two children together.

However, three years ago, Ruth left her husband after he exhibited frightening behaviour towards her.

Read more: Ruth Dodsworth reveals children warned her not to come home as their dad would kill her

Over a nine-year period, Wignall stalked and harrassed his wife.

This reportedly consisted of phoning her 150 times per day and secretly placing a tracker on her car.

In April 2021, Wignall was jailed for three years for controlling and coercive behaviour towards his wife.

The ITV weather forecaster has previously revealed that her ex-husband could possibly only have to serve half of his sentence.

With his possible release from prison imminent, the 46-year-old has taken action. She shared what she had done with her 36.4k followers yesterday (Tuesday, March 15).

“Exactly 1 year ago today my ex husband pleaded guilty to stalking and #coercivecontrol,” she tweeted.

“I’ve spent this aft with @swpolice learning how to protect my home/family ahead of his possible imminent release,” she continued.

“That’s our reality. Alarms everywhere! It’s all good but it’s not over.”

She posted a picture along with her tweet. It showed a painting with the words “It’s all good!”

Ruth then replied to her own tweet, writing: “He was sentenced to 3 years 9 months to run concurrently. Told to serve half minimum.”

“Can apply for early release 4.5 months before the halfway point. This is standard apparently,” she continued. “Lifetime restraining order.. yes. But that’s basically just a piece of paper. He’s a dangerous man.”

Ruth previously opened up about surviving her husband during an appearance on This Morning last year. During the interview, she revealed the turning point for her, when she knew she was in danger.

“By the time my children got home from school they were phoning me saying, ‘Mum, don’t come home. He is going to kill you,'” she said.

“For me, that was a turning point. I didn’t go home that night because I think if I had, I wouldn’t be here now in any shape or form.”