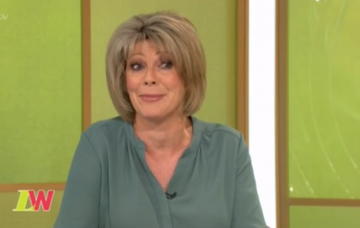 Ruth Langsford admits to weeing in the shower!

An etiquette expert claims it's "disgusting"

This Morning presenter Ruth Langsford admitted to weeing in the shower today on This Morning – with an etiquette expert calling the habit “disgusting”.

The show held a debate on the subject, after a Mumsnet user drew criticism for admitting to doing it.

Read more: Mark Wright given warning as he announces This Morning hosting debut

While several people commented that they thought it was fine – and even good for the environment as a form of water conservation – others were not so sure.

Some commenters compared the act of weeing in the shower to defecating in it, while others thought that it was not so different from washing off sweat and grime.

The This Morning crew decided to broach the unexpectedly thorny topic with the aid of etiquette expert William Hanson.

Ruth – along with Lizzie Cundy – freely admitted to weeing mid-shower, with Lizzie even claiming she’d done it while at a famous friend’s house.

“I did it this morning,” she said. “I stayed at Anthea Turner’s house, Anthea if you’re watching.”

She went on to say that it was hygienic and convenient and insisted it was nothing to be ashamed of.

“You’re not leaving a puddle of urine in there, it rinses away,” she said.

Ruth said that she has done it in the past – saying she would go in the shower rather than getting out to use the toilet in the middle of a shower.

“So that’s what that smell is,” her husband and co-host Eamonn Holmes quipped after her confession.

But William insisted it was disgusting – claiming that if you need a wee in the shower, you should get out, towel yourself off, and use the toilet.

“I’m not a plumber but I’d imagine lavatory waste disposal is different from a shower’s pipe that is taking things away,” he said – perhaps referring to the fact that toilets must deal with solid waste as well as liquid.

But he seems to be in the minority – with 73% of the show’s viewers claiming they had also relieved themselves in the shower.

William later tweeted his shock at the revelation.

“Following @thismorning from earlier I am HORRIFIED that so many a) do and b) admit to weeing in the shower.

“I shall say this: men and women may very well do it, but gentleman and ladies do not.”

Own up – do you wee in the shower? Let us know what you think of this story by leaving us a comment on our Facebook page @EntertainmentDailyFix!