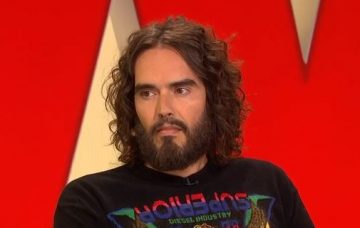 Russell's mum Barbara was injured in a car collision in April

Russell Brand has said his mum is making a “remarkable recovery” after sustaining serious injuries in a car accident.

The comic’s mother, Barbara, has been in hospital since April after she was injured in a head-on collision in Essex.

Appearing on ITV’s Loose Women on Wednesday, Russell gave an update on his mother’s condition, and praised the NHS for their care and support.

“But she’s making a remarkable recovery due to her spirit and the incredible National Health Service and the people that work there do such phenomenal work. It’s unbelievable.”

At the time of the accident, Barbara had just finished chemotherapy, after having cancer for a sixth time.

Russell said: “She’s still sort of having to go for regular checks and that. She bounces right back – the woman wants to live – she’s full of spirit.”

The comedian and movie star also spoke about how Barbara’s accident and injuries had affected him.

“If something dramatic and awful happens in your life you can start to overly identify with it, you can make it your life as it were. But really, it didn’t happen to me, it happened to my mum.

“My job is be supportive, be present, be kind, be loving, recognise when you’re in hospital, everyone’s there with their own problems, people that are working there they’ve got their challenges.

“In the past I think I may have had a tendency to be very, very self-centred.”

Russell had previously announced his mother’s injuries meant he was delaying or cancelling all remaining dates on his Re:Birth tour.

He had told fans: “I won’t be able to do the rest of my Re:Birth tour. If you’ve got tickets, they’ll be refunded or possibly rescheduled but I can’t really imagine that and I certainly can’t imagine performing at the moment, because I feel too sad and connected to this.

“I apologise but obviously it’s circumstances beyond my control.”

My Mum: Thank you pic.twitter.com/LXLf7HgGEo

Russell also shared an update to Twitter, saying his mum was “improving” and though she wasn’t better, she’s “far better than she was”.

Russell also praised the staff at his mother’s hospital.