Russell Brand has thanked fans for their well-wishes after his beloved mum, Barbara, was seriously injured in a car accident.

The comedian and movie star has described his 71-year-old mother’s injuries as “life-threatening” and delayed or cancelled all remaining dates on his Re:Birth tour.

He said Barbara had just finished chemotherapy last month, after having cancer for a sixth time.

In a video message to fans, posted to Twitter on Monday afternoon, Russell said: “My mum’s been in a really serious road accident and has sustained what are called polytraumatic injuries, that means numerous, life-threatening injuries.

“So, I won’t be able to do the rest of my Re:Birth tour. If you’ve got tickets, they’ll be refunded or possibly rescheduled but I can’t really imagine that and I certainly can’t imagine performing at the moment, because I feel too sad and connected to this.

“I apologise but obviously it’s circumstances beyond my control.”

Russell did not go into details about the road accident, but it’s been reported Barbara was a passenger in a car that collided with another vehicle in Essex last week.

He told fans: “What I’ve realised in this situation is some things that are really obvious: the importance of people you love. When you’re in a hospital you are surrounded by people who are dealing with traumatic situations and suffering and pain.

“It brings you to a kind of bare and raw truth about your own reality.

“I’m really sad for my mum as she’s vulnerable. She only finished chemotherapy a month ago, and for her to be in this situation again already is very difficult.

“What I suppose I would like to say is how I am reminded, as I have been many times across my life, of the importance and significance of the NHS, who have already saved her life on six occasions – my mum’s had cancer six times.

“To see the way the medical profession operates is a phenomenal thing and we should be very grateful for the NHS. I think of it as the soul of this country, where people are benevolent and kind and doing something valuable for a living.”

Russell concluded: “Sorry again for conveying this sad news to you. I won’t be on social media for a while.

“Thank you for all your positive, beautiful messages and prayers, for those of you to whom that is meaningful and appropriate. And please, continue to keep my mum, Barbara Brand, in your thoughts and hearts.

“For the rest of you, I’m sending lots of love to you and gratitude.”

Thanks for your kind messages.
ReBirth delayed or cancelled due to my Mum’s accident. pic.twitter.com/iSW3RG9Esu

Fans were quick to send their well-wishes to Barbara and tell Russell not to worry about the tour and just focus on his mum.

He cancelled a planned gig in Aberdeen last week following news of his mum’s situation.

Russell’s next tour date had been scheduled for Manchester on Tuesday night.

His website now lists all remaining tour dates as cancelled. 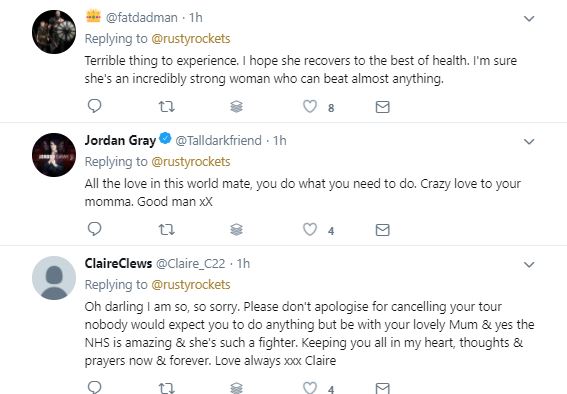 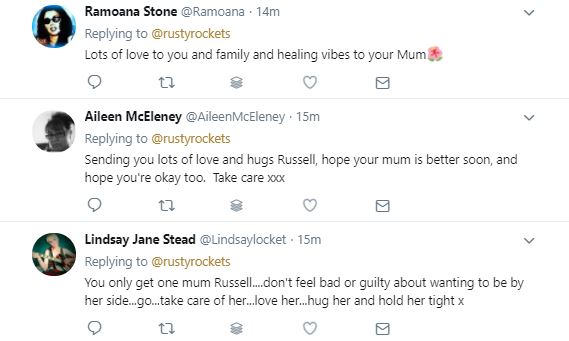