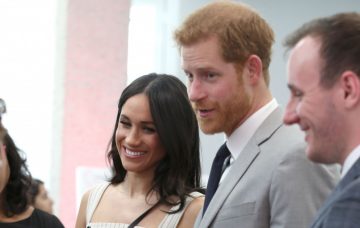 And there are some surprises!

Excitement at Windsor Castle is mounting as some of the 2000-plus guests have begun to arrive, ahead of the ceremony of at midday.

Luther actor was among the first famous faces to arrive, delighting the crowds who have gathered to enjoy the momentous occasion.

US megastar Oprah Winfrey is also in attendance.

Prince Harry’s ex, Chelsy Davy, has also taken her place in the venue.

The Middletons arrived at the venue together, looking relaxed, doubtless thinking back to Pippa’s big day when all the eyes of the world were on her!

Pregnant Pippa looked stunning in a mint green floral dress from The Fold.

Yet to arrive but likely to attend are fashion designer Victoria Beckham and husband David; Victoria recently appeared to confirm during an interview on James Corden’s US chat show that they would be there for the nuptials.