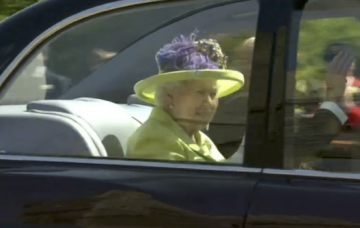 They waved to the crowds

The Queen has arrived at Windsor Castle for Prince Harry and Meghan Markle’s wedding.

Her Majesty wore a lime green tailored coat paired with a floral dress underneath, as she arrived with Prince Philip, who recently underwent a hip operation.

The Queen, 92, and Philip, 96, made her way into St George’s Chapel to greet their grandsons William and Harry.

The groom and The Duke of Cambridge both wore the frockcoat uniform of the Blues and Royals.

Harry waved to the crowds of people before stepping into St George’s Chapel.

Meghan and Harry’s ceremony will begin at noon.

The couple’s guests began to arrive at around 11 am.

George and Amal Clooney, Elton John and David and Victoria Beckham are just among the celebs that have arrived so far.

Cressida Bonas has also entered the grounds of the castle.

The bride is expected to arrive at the Chapel around 12pm.

The car carrying Meghan and her mother Doria has already entered the grounds of Windsor Castle.

Onlookers managed to get a sneaky peek of what the former actress is wearing.

Through the car window, it seems she is wearing a full veil, with a dress featuring long sleeves and a bateau neckline.