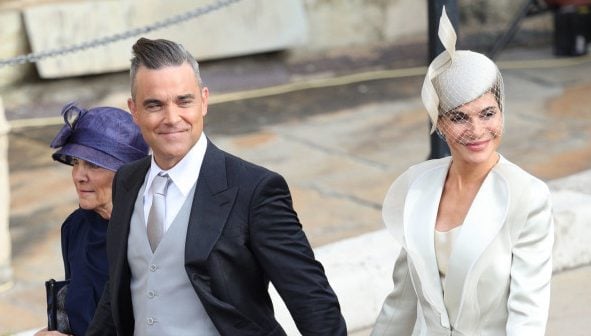 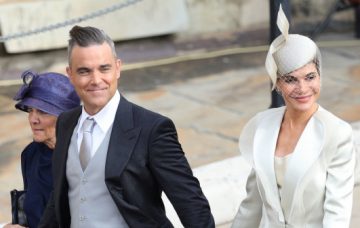 Robbie Williams’ daughter Teddy had a starring role at the Royal Wedding as one of Princess Eugenie’s adorable bridesmaids.

But it was her popstar dad Robbie, 44, who drew the attention first when viewers noticed he appeared to be chewing gum in church!

The ‘Angels’ singer was seated in the Quire with his X Factor co-judge wife Ayda, 39, when fans watching the coverage on ITV’s This Morning noticed he seemed to be chewing something.

And, naturally, they took to Twitter to accuse Robbie of making a faux pas.

Robbie Williams chewing gum in the royal stalls in the Quire at St George’s. Oh dear! His daughter, Teddy, is a bridesmaid.

Robbie and Ayda arrived at the chapel alongside Ayda’s mum, Gwen, who had an unfortunate mishap when a gust of wind blew her hat off!

The X Factor judges have been good friends with Princess Eugenie and her new husband Jack Brooksbank for years, hence why their daughter was chosen as a bridesmaid.

Robbie and Ayda have always kept Teddy away from the spotlight but on Friday she was front and centre as she joined other members of the bridal party including Prince George and Princess Charlotte in walking down the aisle.

Teddy looked adorable as she walked down the aisle, drawing praise from viewers for her good behaviour.

Many took to Twitter to tell Robbie and Ayda they should be very proud parents – and say they think Teddy is the spitting image of her famous dad!

Robbie Williams and Ayda’s daughter is so cute! Spitting imagine of Robbie! #RoyalWedding

Robbie & Ayda Williams’s daughter Teddy is the cutest brides made ever! #royalwedding

Robbie Williams daughter is the image of him #RoyalWedding

Robbie and Ayda’s daughter is so cute as a flower girl! She looks just like Robbie 🌸

It featured a low cut back specifically requested by Eugenie so she could show the scar she has from surgery she had for scoliosis aged 12.

She wore the Greville Emerald Kokoshnik Tiara, lent to her by Her Majesty The Queen, who had arrived with The Duke of Edinburgh shortly before the bride.

The newlyweds embarked on a short carriage ride through the streets of Windsor after saying “I do” before returning to Windsor Castle for a reception hosted by The Queen.

What did you think of the Royal Wedding? Leave us a comment on our Facebook page @EntertainmentDailyFix and let us know what you think!