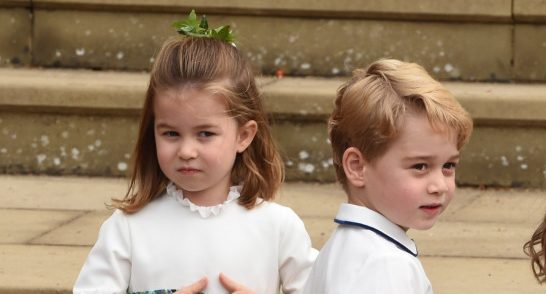 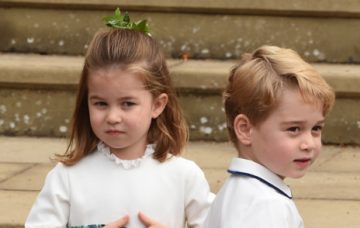 Princess Charlotte gave the crowds a big wave as she arrived with brother Prince George for the Royal Wedding on Friday morning.

The three-year-old daughter of The Duke and Duchess of Cambridge was joined by brother George, five, in the bridal party for Princess Eugenie’s wedding to Jack Brooksbank.

The little royal looked thrilled to be taking part, happily waving at the spectators lining the streets of Windsor for the big day.

Her parents, William and Kate, arrived to the chapel earlier on, leaving Charlotte and George with the other little bridesmaids and page boys, who included Mia Tindall and Robbie Williams’ daughter Teddy, six.

The Bridesmaids and Page Boys have arrived at St George's Chapel! #RoyalWedding pic.twitter.com/k26Z2uGeNB

It’s been a big year for Charlotte and George as they also served as bridesmaid and page boy for their uncle Prince Harry’s wedding to Meghan Markle at the same venue in May.

She specifically asked for a low back gown to show the scar from her surgery to correct scoliosis at the age of 12.

The dress features a neckline that folds around the shoulders and down into a low back design, which ends in a full length, flowing train.

Eugenie and Jack invited 850 guests to join them at St. George’s Chapel for their wedding day.

Around 1,200 members of the public were given special invitations to watch proceedings from within the grounds of Windsor Castle following a public ballot.

Representatives from charities supported by the couple were also given access to the castle grounds, where they can watch a live broadcast.

Eugenie and Jack announced on Friday morning they have chosen British fashion photographer Alex Bramall to take their wedding pictures, after he previously shot Eugenie for Harper’s Bazaar magazine.

He said: “It is an honour and a privilege to be invited to photograph Princess Eugenie and Jack on this most special of days. I look forward with great excitement to capturing this significant occasion and wish them both a happy future together.”

The wedding had an autumnal theme, which was reflected in the choice of flowers and decorations in the chapel.

Floral designer Rob Van Helden is in charge of the floral displays, which have been created using foliage sourced from Windsor Great Park combined with roses, spray roses, hydrangeas, dahlias and berries.

Eugenie, 28, and Jack, 32, met when they were both on skiing holidays to the same resort in Switzerland seven years ago.

In an interview with This Morning’s Eamonn Holmes and Ruth Langsford that aired on Friday morning, Eugenie said it had been “love at first sight”.

Jack added: “We were skiing with friends and I saw her first. Then we just stared at each other.”

Eugenie laughed: “I thought, ‘What a silly hat! Who is that?’ And then he came over and shook my hand and it was all butterflies and nervous.

“I think I rang my mum that night and said, ‘I’ve just met this guy Jack!’ I remember thinking, ‘I really like this guy, I hope he likes me too!'”

Jack described Eugenie as a “bright, shining light”, while Eugenie said: “Jack is the kind of guy, you know when you are lost at a party and you can’t find anyone to talk to and you start panicking and you need help? He walks in, makes everybody feel so special. He will scoop you up, talk to you and make you feel a million dollars. He is so humble and generous. That person you know immediately you’ve got a friend.”

The couple announced their engagement through Buckingham Palace in January.

Jack proposed during a holiday to Nicaragua, presenting Eugenie with a padparadscha sapphire ring surrounded by diamonds.

He got down on one knee after the couple hiked to a beautiful spot next to a lake, with a volcano in the background.

Eugenie previously told BBC’s The One Show: “It was really surprising, even though we’d been together seven years.”

Eugenie is the youngest daughter of Prince Andrew, The Duke of York, and Sarah Ferguson, Duchess of York.

His grandmother, Joanna Newton, 91, famously joked to Daily Mail earlier this year: “I never thought he would get married to a Royal. He’s a charming boy and all that but not the most intelligent and I would never have thought this would happen.

“I just never thought it would go this far, her being a member of the Royal family. But Jack has always had lovely manners and has always been a good egg.”

Princess Eugenie is ninth in line to the throne.

She and Jack are marrying at the same venue where Prince Harry and Meghan Markle – now The Duke and Duchess of Sussex – tied the knot in May this year.

Leave your congratulations for Eugenie and Jack on our Facebook page @EntertainmentDailyFix!