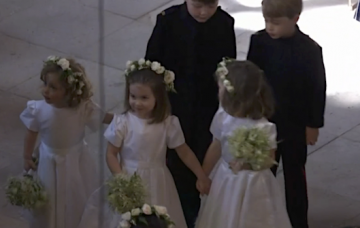 There will be six bridesmaids and four page boys

Obviously everyone was most excited to see Meghan Markle’s dress today, but we’ve also been waiting with baited breath to catch a glimpse of little Prince George and Princess Charlotte.

Harry’s nephew and niece are, of course, a page boy and bridesmaid – and they are old hats at their tender age, after fulfilling the same duties at Aunty Pippa’s wedding.

And don’t they look ADORABLE!

The world got a little look at them as they scampered past Meghan as she arrived at the altar, aside her groom.

There are 10 bridesmaids and page boys in total at Prince Harry and Meghan Markle’s wedding.

Meghan has six bridesmaids, including Charlotte. Harry has four pageboys.

Joining Charlotte will be three-year-old Florence van Cutsem, who is Harry’s goddaughter.

Finally, the youngest bridesmaid will be two-year-old Zalie Warren, who is Harry’s goddaughter.