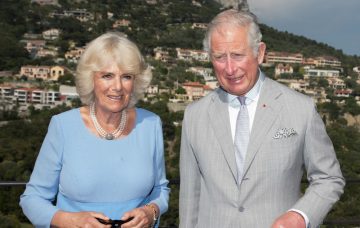 Everyone was asking why Camilla did not attend the wedding

Camilla, Duchess of Cornwall was noticeably absent at the Royal Wedding between Princess Eugenie and Jack Brooksbank on Friday.

Her husband Charles, Prince of Wales arrived to St. George’s Chapel at Windsor Castle alone, which left many viewers wondering why Camilla wasn’t with him

The answer? She had a prior engagement in Scotland she didn’t want to cancel.

While the rest of the Royal Family were gathering to watch Eugenie and Jack’s nuptials, Camilla was carrying out a solo royal duty in Aberdeenshire.

Camilla, who has been in Scotland this week for a range of engagements, visited children at a small village school called Crathie Primary.

It’s believed she had the visit booked in before Eugenie and Jack announced their wedding date and did not want to cancel and disappoint the students.

According to the Daily Mail, sources have said Camilla sent Eugenie a handwritten letter saying she was sorry she couldn’t attend and explaining why she didn’t want to cancel her engagement at the school.

An insider said: “She is fond of Eugenie and her sister Beatrice, and is very disappointed that she cannot be there.”

While Camilla was unable to attend, the rest of the senior Royals were out in force, led by The Queen and The Duke of Edinburgh, who is said to have decided on the morning of the wedding that he would attend.

There had been question marks over whether Prince Philip, 97, would appear as his name did not feature on the Order of Service.

But he proved doubters wrong by arriving alongside Her Majesty shortly before Eugenie made her entrance, accompanied by her father Prince Andrew, The Duke of York.

Eugenie’s wedding dress was designed by Peter Pilotto and Christopher De Vos and featured long sleeves with a flowing train, folded shoulders, and a low back.

She specifically requested the low back detail as she wanted to show the scar on her spine from surgery to correct scoliosis at the age of 12.

The royal chose not to wear a veil, accessorising instead with the Greville Emerald tiara which she borrowed from her grandmother, Queen Elizabeth II.

She also wore earrings that were a wedding gift from Jack.

Would you cancel a prior engagement to attend a wedding? Leave us a comment on our Facebook page @EntertainmentDailyFix and let us know what you think!