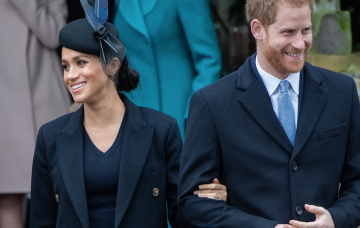 One bookie suspended betting last month on the Duchess of Sussex delivering a double arrival following a sudden flurry of wagers.

But rumours have only grown since then and odds on Meghan having twins have now tumbled once more.

And the Daily Star reports that one high-ranking courtier has even placed a bet on it happening, fuelling speculation of the first royal twins in almost six centuries.

The last recorded pair were born to James I of Scotland and wife Queen Joan in 1430.

Bookmaker Betfair has slashed the odds on Meghan having two babies next spring to 3/1, down from 5/1 a couple of weeks ago.

Researchers at the Vrije University Medical Centre in the Netherlands found women in their 30s were more likely to have a double arrival than those in their 20s, according to the Daily Express.

One of the key findings showed older women were more likely to prepare more than one egg per menstrual cycle, a pattern strongest in over-35s.

It’s not just science that points to possible royal twins, as Princess Diana’s former psychic Sally Morgan predicted exactly that on Loose Women just days after Meghan and Prince Harry’s wedding in May.

A spokesman said: “An unprecedented amount of bets on Meghan and Harry to have twins has forced us to stop taking bets on the market altogether this morning.

“Since the day began, the stream of bets has led us to believe that perhaps the punters, or an insider source, knows something more than we do.”

Do you think Meghan is having twins? Leave us a comment on our Facebook page @EntertainmentDailyFix and let us know what you think!