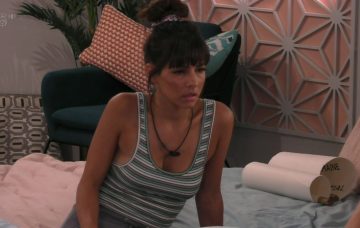 Roxanne Pallett steps down from pantomime role and quits showbiz

She has also parted ways with her breakfast radio hosting job

Roxanne Pallett has stepped down from her Christmas pantomime role after confirming she will not return to her breakfast radio job.

A spokesperson for the Celebrity Big Brother star has said Roxanne, 35, is taking a break from showbiz for an unspecified period of time.

The former Emmerdale actress has dominated headlines in the last few days after controversially accusing Big Brother housemate Ryan Thomas of punching her.

After quitting the show on Friday night and viewing the footage, she issued a public apology to Ryan, admitting she had “got it wrong”.

Her representative told The Sun: “We and Roxanne have decided today that she will be stepping down from her position at Minster FM, and from her upcoming role as Cinderella in Chesterfield.”

The statement concluded: “Roxanne will not be undertaking any more media interviews and will now be taking some time away.”

Roxanne had been due to appear in Chesterfield’s festive pantomime Cinderella alongside X Factor’s Rhydian Roberts.

A statement from the pantomime’s producers confirmed: “Roxanne Pallett has today decided to step down from her upcoming role as Cinderella in Chesterfield, in order to take some time out and reflect on recent events. We wish Roxanne the best and will be announcing her replacement in due course.”

Minster FM also confirmed Roxanne’s departure from the radio station in a separate statement; she’d joined the Yorkshire station earlier this year to co-host the breakfast show with Ben Fry.

The station said: “As a result of discussions today with her representatives, Minster FM can confirm that Roxanne Pallett has stepped down from her position at the station with immediate effect to take some time out and reflect on recent events.

“Roxanne will not be returning to Minster FM.”

Bridget Davies, managing director at Minster FM, said: “We are very close to our audience and our customers, and it’s been alien to us to not be able to honestly communicate with them.

“It’s been very difficult not to be able to tell them what’s been going on in here at the station.

“However, following a meeting today we can confirm Roxanne will not be returning to Minster FM and as she said to Emma (Willis) last night, she was going to take some time to reflect and address some issues, (we) hope that goes well and she gets the help and support she needs.”

Roxanne tearfully claimed last week that Coronation Street’s Ryan had punched her deliberately during what appeared to be a play fight in the kitchen.

She slept in a separate bedroom that night after saying she felt uncomfortable.

A confused and upset Ryan, who apologised and said there was no malice or anger in his actions, was given a formal warning from Big Brother, resulting in outrage among his family, friends and viewers.

Ryan’s girlfriend Lucy Mecklenburgh and his mum Gail have both called for Ryan’s warning to be revoked.

Roxanne appeared on both Jeremy Vine and Celebrity Big Brother on Monday to apologise to Ryan.

She has described herself as “the most hated girl in Britain”, saying: “For Ryan, his family, friends, colleagues and everyone I’ve affected by such an enormous reaction that could have been devastating for him, all I can say is I’m devastated and I’m sorry.