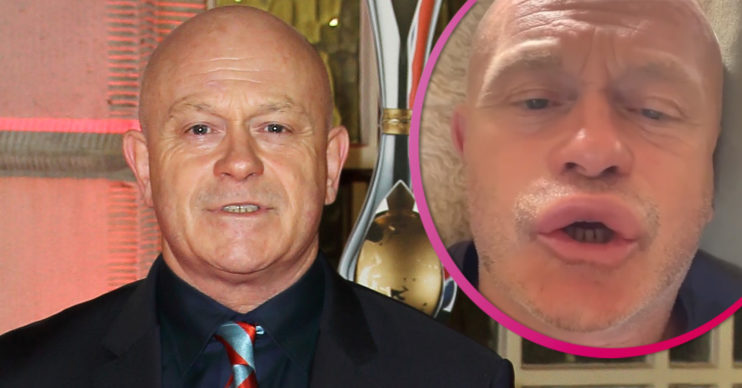 The actor and presenter has suffered a painful looking injury indeed

Ross Kemp is recovering from a nasty injury after being attacked by multiple wasps.

The former EastEnders actor, 56, thanked the NHS for tending to his swollen face.

Ross took to social media to explain how the unfortunate incident went down.

Attempting to do some DIY, around four wasps stung him on the mouth area.

His upper lip swelled up significantly, more than doubling in size.

Taking to Instagram, he shared his ordeal over a series of videos.

Addressing his followers, he said: “I look like Mick Jagger don’t I, well that’s what happens when you get stung by three or four wasps in the nasal and lip area.

“Be careful of those critters, don’t go upsetting them by opening up a loft space without asking their permission first.”

The actor turned documentary maker updated: “Now being seen by our fantastic NHS.

“A very cool doctor’s just given me hydrocortisone, hopefully that’s gonna bring it down a bit. I just can’t get no satisfaction, ow, it hurts a bit.”

He went on to joke that he looked like a victim of Botox gone wrong.

Ross said: “I just want to say a huge thanks to Dr Lettice for sorting me out. I obviously still look like a massive Botox victim.

Ross is a huge fan of the NHS

“But it just goes to show what happens if you mess with nature.

“I had no idea once I opened the hatch that there was a wasp nest on top of it.

“I am very lucky I was only stung around my nose, up my nose and on my top lip. It could have been FAR worse!”

Another quipped: “A lot of jealous girls!… we’ve been waiting months for salons to open for lips like this! X.”

And a third commented: “Oh crikey!! I thought you’d tried BOTOX as part of some research or something!”

Ross previously praised the NHS during his ITV documentary Ross Kemp: On the NHS Frontline.

Here he observed a Milton Keynes hospital as it handled the ongoing coronavirus pandemic.

He said during the doc: “The professionalism, the organisation, but most importantly it’s the love. The people are being treated with so much care, so much love here.

“I’ve never been in a position like this in my life, but the NHS staff here are highly organised, incredibly professional, but they care.

“They really care about the people they look after and that is the most overwhelming thing… yeah. It’s an emotive place I have to say but, the care and the love is overwhelming.”