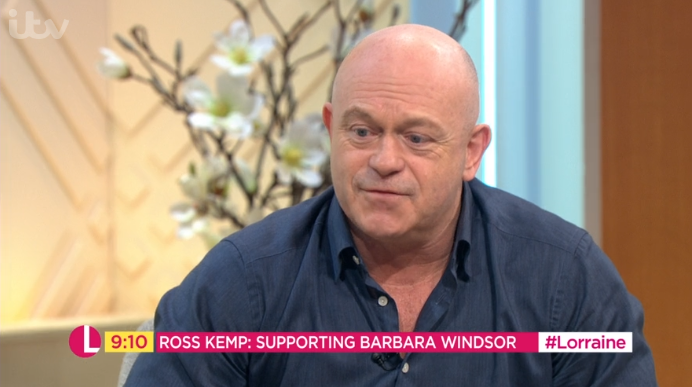 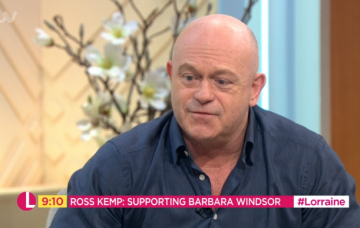 Ross Kemp has given an update on Barbara Windsor and her husband Scott, revealing Scott is finding his wife’s battle with dementia tough.

Appearing on Lorraine on Thursday (February 28) Ross opened up about his former co-star.

Barbara, 81, last year confirmed she had been diagnosed with Alzheimer’s in 2014 and her co-stars from the Walford-set soap rushed to offer their support.

Speaking to host Lorraine about his new TV show In The Line Of Fire, the actor-turned-documentary-maker opened up about Barbara’s condition.

“She’s okay,” he responded when asked by Lorraine how Barbara was. “Obviously she has Alzheimer’s and it’s progressively degenerative.

“Scott is doing a brilliant job of looking after her. And he’s raising money, he’s running the marathon, go support him if you can.

He continued: “But obviously when I speak to him, you can tell, it’s hard.

“What they’ve done, the most important thing they’ve done, is they’ve been open about it, and it’s helped other people to talk openly about it.”

Lorraine also asked him the inevitable question that follows the star wherever he goes: will he be making a return to EastEnders?

Ross shared a picture last year of him visiting his on-screen mum.

Appearing on Good Morning Britain, the former EastEnders star revealed he had visited his soap mum.

Ross said: “I went around for a cup of tea and I was there for three and a half hours.

“I had five cups of tea and three shortbread biscuits, which I’m not supposed to have on my diet, and I laughed a lot.”

“She has this great ability, when she walks through that front door, she’s ‘on’,” he added. “It was like seeing my second mum.”

And he also revealed earlier this month that she still recognised him.

“Barbara has been diagnosed with Alzheimer’s but she still knows who I am,” Kemp told the Daily Star Sunday.

“I can’t reiterate enough how much Scott is doing for her.

“He’s going above and beyond in the way he’s looking after her.”

Scott, 55, is running the London Marathon with a number of EastEnders stars to raise money for the Dementia Revolution, a campaign formed by charities Alzheimer’s Society and Alzheimer’s Research UK.

Barbara’s Revolutionaries and can be sponsored by visiting this link.