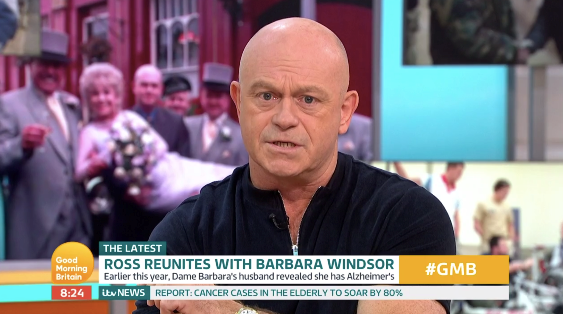 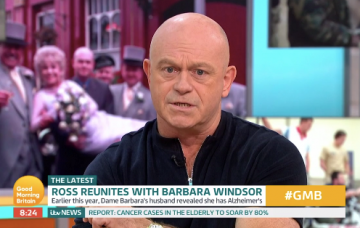 He visited the EastEnders icon on Monday

Ross Kemp has praised his “very brave” friend Dame Barbara Windsor for speaking out about her Alzheimer’s diagnosis.

Appearing on Thursday’s Good Morning Britain, the former EastEnders star revealed what he and his soap mum got up to when he visited her on Monday.

Ross, 53, said he visited Babs, who was diagnosed with the disease in 2014, for a cuppa but ended up staying for five.

The actor said: “I saw her on Monday, went around for a cup of tea and I was there for three and a half hours.

“I had five cups of tea and three shortbread biscuits, which I’m not supposed to have on my diet, and I laughed a lot.”

“She has this great ability, when she walks through that front door, she’s ‘on’,” he added. “It was like seeing my second mum.”

Ross, who played Grant Mitchell in the soap, went on to call Barbara, 80, and her husband Scott Mitchell “brave” for sharing the actress’ diagnosis with the world.

He continued: “Her and her husband Scott have been very brave putting it out there and hopefully it will help other people with the same condition be more open about it.

“What she has done is very brave, she has a great husband in Scott. The more we talk about any issue in our life, the better we are dealing with it.”

On Monday, Ross took to Twitter to share a sweet photo showing himself enjoying a catch-up with Barbara, who famously played Grant’s mum Peggy Mitchell in the soap.

The photo shows Ross leaning in towards Barbara, who had her arm around his neck as they smiled at the camera.

And he wasn’t the only EastEnders star to visit Babs.

Jake Wood, who plays Max Branning in the soap, also paid the soap icon a visit alongside his wife Alison Murray.

He shared a picture to Twitter showing himself, Alison, Babs, and her hubby Scott smiling for the camera.

Last month, news broke that Barbara was diagnosed with Alzheimer’s in 2014.

In an emotional interview with The Sun, her husband Scott, 55, said they decided to share the news because it was “becoming a lot more difficult to hide.”

After the news emerged, a string of famous faces sent the actress their well-wishes.

Among those who issued statements afterwards was Ross, who said: “Very proud of Scott and Barbara for speaking openly about Barbara’s diagnosis.

“I hope by talking openly it will make it easier for others to talk about this dreadful disease.

Did you enjoy seeing Barbara and Ross on screen together? Leave us a comment on our Facebook page @EntertainmentDailyFix and let us know.